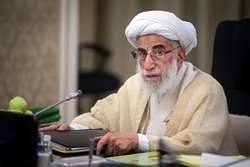 RNA – On July 31st, Ayatollah Ahmad Jannati, the secretary-general of the Guardian Council, ‎offered his condolences on the occasion of the martyrdom anniversary of Imam Muhammad ‎ibn Ali al-Jawad and said, “We are on the eve of the month of Dhil-Hijjah, the month which ‎contains the best festivals, including the festivals of Eid al-Adha and Eid al-‎Ghadir and the Day ‎of Arafah ‎and I hope everyone will enjoy this month’s spiritual virtues.”‎

He added, “July 30th was the death anniversary of Ayatollah Meshkini, a jurisprudent who ‎was truly a scholar, a practitioner, a man who lived simply and always a true follower of the ‎school of thought of the late Imam Khomeyni and Ayatollah Khamenei.”‎

Ayatollah Ali Meshkini [December 2, 1921 – July 30th, 2007] was the chairman of the ‎Assembly of Experts and a member the Society of Seminary Teachers of Qom. He was the ‎author of many books on Islamic jurisprudence and general issues of Islam.‎

In conclusion, Ayatollah Jannati stated that the Ahl al-Bayt and their followers have been ‎oppressed throughout history and pointed to the crimes perpetrated by Saudi Arabia in ‎Yemen and noted, “Today, the oppressed people of Yemen have been subjected to ‎oppression and crimes by the Saudi rulers, who must end this war as soon as possible and ‎allow independent international bodies to investigate the crimes of the Saudis.”‎