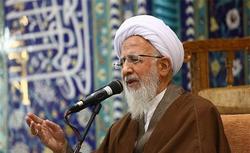 Ayatollah Javadi-Amoli said, “As the breath of a lover of the Quran is the praise of God, the ‎breath of a Shi’ah Muslim ‎who loves ‎the Infallible Imams means the same‎.”‎

RNA – Speaking at a special cultural program in the Jame’ Courtyard of the Holy Shrine of ‎Imam al-Ridha in Mashhad, Ayatollah Abdollah Javadi-Amoli, a prominent source of religious ‎emulation, said, “As the breath of a lover of the Quran is the praise of God, the breath of a ‎Shi’ah Muslim who loves ‎the Infallible Imams means the same.‎”‎

The teacher in the Islamic Seminary of Qom, Javadi-Amoli stated that the breath of a pilgrim ‎or a neighbour of the holy shrine is the same as the breath of a worshipper and added, ‎‎“During these days, we can sanctify our breaths by worshiping the Creator of the Universe or ‎visiting the shrines of the Infallible Imams.”‎

He continued with a quotation from Imam Ali’s Nahj al-Balaghah [Peak of Eloquence] on ‎types of worshipping, “Those who have accepted the servitude of God are of three types. ‎Some worship God because of the fear of Hell, so their weeping is cowardly, some for the ‎craving of paradise, and some out of love for God Almighty. These are friends of God and ‎they because they haven’t yet reached God.”‎

Elsewhere, Ayatollah Javadi-Amoli‎ said, “Sometimes it is just a sigh and sometimes a laugh. ‎Religion does not always teach us to weep; rather, it is the beginning of the path of ‎‎‘humbleness’ for man to heed. Imam al-Mahdi in the opening of Du’a al-Iftitah [The Opening ‎Supplication] teaches us to be ‘humble’ before God, in the sense that man can grow from an ‎admirer to the admired.”‎

He pointed out that the man who is in a position of humbleness says to God, “If I am bad, ‎why did you reprimand me? You are greater and stronger than me and All Merciful. ‎Forgiveness is the attribute of the strong. So forgive me.” This rank, he concluded, requires ‎high level of understanding.‎

Tags: Javadi Ridha Mashhad
Short Link rasanews.ir/201s4f
Share
0
Please type in your comments in English.
The comments that contain insults or libel to individuals, ethnicities, or contradictions with the laws of the country and religious teachings will not be disclosed