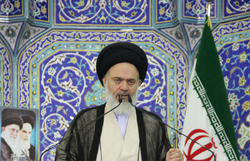 Ayatollah Hoseyni-Bushehri ‎explained that Iran won’t allow the enemies to interfere in the ‎security of international waterways and said, “The awakened people will slap the enemies ‎‎hard in response to any ‎action that they take ‎against the Islamic Revolution and the ‎people.”‎

RNA – In his Friday prayer sermon to a large and fervent crowd of believers in Qom’s Quds ‎‎‎‎‎Prayer Hall, Ayatollah Seyyed Hashem Hoseyni-Bushehri ‎referred to the capture of the British ‎tanker Stena Impero by the Islamic Revolutionary Guard Corps (IRGC) in the Strait of ‎Hormuz and added, “The day that the Iranian oil tanker was captured in Gibraltar, the media ‎organizations of the world remained silent and said that it was due to the sanctions, but ‎today they’re making a commotion. The Supreme Leader of the Islamic Revolution ‎‎[Ayatollah Khamenei] initially said with power that the believing forces will do the right thing ‎in their place.”‎
‎ ‎
The member of the board of directors of the Assembly of Experts‎ stressed that the British ‎had injudiciously seized the Iranian tanker [Grace 1] but Iran captured the British tanker in ‎accordance with international law because of they had violated shipping laws. They sent a ‎representative and a letter saying that the ship should be freed, assuming that the people, ‎the authorities, the Supreme Leader and the security and military forces will back down.” ‎

Ayatollah Hoseyni-Bushehri added, “The awakened people will slap the enemies ‎hard in ‎response to any ‎action that they take against the Islamic Revolution and the people. We ‎declare to the world that we’re calling for the safety of the international waterways and we ‎won’t allow anyone to disrupt the secure shipping, especially in the Persian Gulf and won’t ‎allow others to interfere and sabotage us.”‎
‎ ‎
The secretary of the Supreme Council of the Islamic Seminary ‎praised the army for arresting ‎a group of American spies and said, “The Supreme Leader has repeatedly raised the issue of ‎interference but his statements weren’t taken seriously and some of the spies infiltrated ‎sensitive centres but the security and intelligence forces outmanoeuvred the enemies and this ‎demonstrates that the military and security forces are standing with the power against the ‎enemies.”‎
‎ ‎
Referring to the meeting of the Supreme Leader with high-ranking officials from Hamas, said, ‎‎“In this meeting, the Supreme Leader relied on the issue of resistance and the definitiveness ‎of the divine promise in the event of a victory in the form of resistance and stated that ‎Sayyid Hasan Nasrallah had announced that the Supreme Leader ‎will pray in al-Quds ‎‎(Jerusalem) is true and will be fulfilled.”‎

Ayatollah Hoseyni-Bushehri ‎said that the enemies are worried because previously, the ‎Palestinians fought with rocks but today, the Islamic Resistance is attacking Israel with ‎precision missiles.‎

Referring to the upcoming Hajj pilgrimage, he said, “Many of our compatriots have travelled ‎to Madinah and Makkah and we pray for them and hope that they will return to their ‎homeland with their pilgrimage accepted.”‎