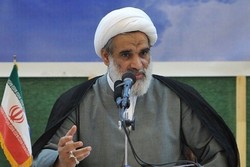 RNA – In an exclusive interview with Rasa News Agency, Ayatollah Abbas Ka’bi, the ‎‎representative of the people of Khuzestan province in the Assembly of Experts, ‎referred to ‎the martyrdom of a number of members of the Islamic Movement of Nigeria (IMN) who ‎were killed on July 23rd by the Nigerian police in the capital Abuja, saying, “This march was ‎held in support of Shaykh Ibrahim Zakzaky, and we are worried about the detention and ‎grave physical condition of this great scholar.” ‎

Shaykh Zakzaky, the leader of the IMN, has been in detention since December 2015 when ‎his residence in the city of Zaria was raided by Nigerian forces, during which he was beaten ‎and lost his left eye.‎

Earlier this month, his son, Muhammad, said after visiting him that he was shocked by his ‎father’s worsening medical condition. Muhammad said that large and dangerous quantities of ‎lead and cadmium had been found in Shaykh Zakzaky’s blood and the cleric needed to be ‎immediately hospitalized.‎

Ayatollah Ka’bi said that the Islamic seminaries, the clergy, the sources of emulation, the ‎teachers in the seminaries, the Society of Seminary Teachers of Qom ‎and all segments of ‎the seminaries, along with the Iranian people as well as the freedom-seeking people of the ‎world, are all concerned about the health of Shaykh Zakzaky‎ and added, “This situation ‎facing Shaykh Zakzaky is an opportunity for unity, national security and peace and solidarity ‎in Nigeria and the Nigerian government is losing such an opportunity in terms of stability and ‎security.”‎
‎ ‎
The member of the Society of Seminary Teachers of Qom said, “We advise the government ‎of Nigeria to respond positively to the rights of the people of Nigeria, based on the ‎principles of human rights, by paying attention to national interests and the health condition ‎of Shaykh Zakzaky and release him so that he can be treated.”‎

His Eminence continued, “The movement which has been advanced by Shaykh Zakzaky is ‎rational and is based on wisdom which is in the framework of the laws and regulations of ‎Nigeria. Therefore, the Nigerian government must provide such an opportunity for national ‎reconciliation and understanding of the special conditions of the Shi’ahs of this country.”‎
‎ ‎
Ayatollah Ka’bi ‎said that the Nigerian government must respond positively to the rights of ‎the Shi’ah citizens of this country and end the state of concern among the Islamic ummah.‎