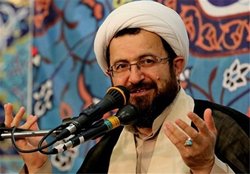 The director of the Institute for the Study of the Lifestyle of the Martyrs‎ said, ‎“Iran’s Islamic ‎Revolution, which was formed on the basis of the model of the Uprising of ‎Ashura, must be ‎taken as a model in order to succeed in the Second Phase of the Islamic ‎Revolution.”‎

Emphasizing that the most important principle of victory against the enemies is summarized ‎in bravery and resistance, he added, “Certainly, continuous presence in the mosques ‎educates the courageous and fearless youth and adolescents, which is what the enemies ‎doesn’t want.” ‎

Hujjat al-Islam Mandegari‎ continued, “Your hopes and endeavours are among the other ‎principles of success in the Second Phase of the Islamic Revolution‎, which should be taken ‎seriously by all.”‎

His Eminence said that Islamic Iran was successful in the first phase and added, “Today, that ‎the United States and other arrogant countries are desperate in the face of Iran and can’t ‎implement their evil plans, is among our great successes.”‎
‎ ‎
He noted that no one denies the problems in the country and it’s necessary to pay attention ‎to these problems and added, “Everyone knows that so far, no ideal system without ‎problems has been established in the world.” ‎

Hujjat al-Islam Mandegari‎ ‎continued to emphasize the need for more attention to the ‎position of the mosque and said, “The mosque is a base that addresses both economic and ‎spiritual problems and responds to the spiritual needs of individuals.”‎
‎ ‎
In conclusion, he stated, “In the school of Islam, the mosque is both a clinic, a place of ‎refuge and a university and we must use this capacity in the best way.”‎

Tags: Mandegari Second Phase Iran Mosque
Short Link rasanews.ir/201s3E
Share
0
Please type in your comments in English.
The comments that contain insults or libel to individuals, ethnicities, or contradictions with the laws of the country and religious teachings will not be disclosed