Arrogant powers don’t understand anything except the language of force ‎ 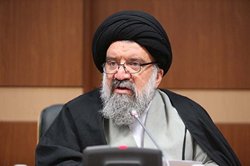 A member of the Board of Directors of the Assembly of Experts‏ ‏appreciated the IRGC’s ‎decisive capture of a British oil tanker in the Strait of Hormuz and said, “The arrogant powers ‎of the world have become desperate and see themselves as having been defeated.”‎

RNA – In an exclusive interview with Rasa News Agency, Ayatollah Sayyed Ahmad Khatami, a ‎member of the Board of Directors of the Assembly of Experts, appreciated the decisive ‎action taken by the Islamic Revolution Guards Corps (IRGC) by capturing the British oil ‎tanker Stena Impero in the Strait of Hormuz on July 19th and said, “The right to retaliate in a ‎reciprocal manner is a natural and rational right upon which the Quran emphasizes.”‎
‎ ‎
The member of the board of directors of the Society of Seminary Teachers of Qom referred ‎to the verse of the Holy Quran, “So should anyone aggress against you, assail him in the ‎manner he assailed you” [2:194] and added, “In response to the arrogant powers and ‎mercenaries who don’t understand anything other than the language of force, we must act in ‎a like manner. What has been done is the administration of justice and the exercise of the ‎clear rights of the sacred system of the Islamic Republic of Iran.” ‎

Arguing that the arrogant powers of the world are in complete desperation and see ‎themselves as having failed, Ayatollah Khatami said, “Through their bulling measures, the ‎arrogant powers want to counter the sacred system of the Islamic Republic of Iran and take ‎the seat of power.” ‎

His Eminence stated that the only way to overcome the enemies is through Resistance ‎Diplomacy and power and said, “In this situation, the only response is to retaliate in a ‎reciprocal manner and with the help of God, the enemies of the Islamic system of ‎government will be crippled.”‎

The member of the Supreme Council of the Islamic Seminaries emphasized, “In order for ‎these measures to be effective is through endurance and not to abandon of battlefield.”‎

Tags: Khatami IRGC Tanker Stena Impero
Short Link rasanews.ir/201s31
Share
0
Please type in your comments in English.
The comments that contain insults or libel to individuals, ethnicities, or contradictions with the laws of the country and religious teachings will not be disclosed