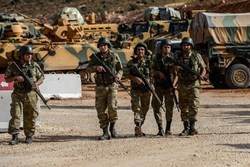 The Turkish Army is providing military training for affiliated militants in Syria to prepare them for a major offensive on the Kurdish militia in Eastern Syria, sources said Sunday.

RNA - “Turkey’s intelligence body is planning to train the terrorists known as the Olive Branch and Euphrates Shield in Turkish military bases inside Turkey,” the Syrian Observatory for Human Rights (SOHR) quoted informed sources as saying.

The Turkish Army is providing military training for affiliated militants in Syria to prepare them for a major offensive on the Kurdish militia in Eastern Syria, sources said Sunday.

The Syrian Observatory for Human Rights (SOHR) quoted informed sources as saying that Turkey’s intelligence body is planning to train the terrorists known as the Olive Branch and Euphrates Shield in Turkish military bases inside Turkey.

Meantime, Turkey has asked the terrorist groups under its umbrella, including those who have been trained in some Arab countries to stand tough against the Syrian Army, go under 20-day specialized military training that includes operating advanced and anti-Tank weapons, in Turkey.

The SOHR also noted that the Turkish Army had previously trained hundreds of terrorists under the name of military and security police at its military bases.

It noted that these measures are highly likely to be in line with the Turkish Army’s preparations for a major offensive on the Syrian Democratic Forces (SDF) in al-Furat and al-Jazira regions.

Tens of ISIL terrorists have been transferred from Turkey to Afrin region in Northwestern Aleppo as reports said the Turkish Army and its affiliated militants are preparing to launch a major offensive on the US-backed Kurdish fighters in Eastern Euphrates.

The Kurdish-language Hawar News Website quoted local sources in Afrin as saying the ISIL terrorists have become active along Turkey’s borders with al-Shieh region in Afrin.

According to Fars News Agancy, Hawar noted that thousands of Turkey-backed terrorists have recently been dispatched to Afrin from Idlib province.

The well-trained ISIL terrorists are being dispatched to Afrin by Ankara as the Turkish Army is preparing for dispatch massive military equipment to borders with Syria to launch a major operation against the Kurdish militias in Northeastern Syria.

Meantime, the residents of the city of al-Bab in Northern Aleppo held protest rallies against the presence of occupying Turkish forces, and urged for a pullout by the Turkish army.

Hawar News website, meantime, reported that tens of residents of al-Bab city staged a protest rally in front of Ankara-occupied military bases in Sheikh Aqil region in al-Bab city to show their protest at the Turkish Army’s seizure of civilians’ lands, destroying their houses and turning them into their military bases.

The news website, meantime, said that the residents of al-Bab City chanted slogans in Turkish and Arabic languages to urge the exit of the Turkish Army from the military bases in the region.