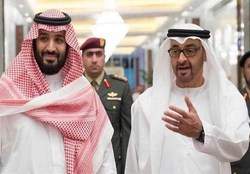 A leading Arab newspaper referred to Riyadh's failures in its internal and foreign policies, stressing that the Saudi-led coalition in war on Yemen is collapsing after the UAE left the Yemen war.

RNA - "After the gap created in the Saudi-UAE coalition, imminent changes are waiting for the region and considerable changes will be made in the regional power balance to the detriment of the Saudi-led coalition," the Arabic-language al-Quds al-Arabi paper wrote on Tuesday.

It added that after the Saudi-led coalition persuaded the US to launch a war against Iran, its difficulties and destructive impacts were revealed and therefore the Americans avoided such a war which would annihilate all sides, noting that the Yemeni forces' advances and reinvigorating their side of the military balance also made it difficult for Riyadh to end the war militarily and therefore, Riyadh is after a political solution with unclear results.

"The UAE may retrieve a part of its balance after withdrawing forces from Yemen and decreasing tensions with Iran but Saudi Arabia will lead the region and itself to a catastrophe by continuing its current policies," the paper underlined.

The New York Times reported on Saturday that the UAE had pulled most of its forces from the Yemen “quagmire” in a “face-saving” decision that has deeply upset its Saudi allies.

UAE officials have been saying for several weeks that they have begun a phased and partial withdrawal of forces, estimated at 5,000 troops a few years ago.

However, significant reduction has already occurred, The NY Times quoted Western and Arab diplomats briefed on the drawdown as saying.

Over the past month, the UAE has cut its deployment around the strategic Red Sea port of Hudaydah by 80 percent to fewer than 150 men, according to people briefed on the drawdown. They have pulled out their attack helicopters and heavy guns, effectively precluding a military advance on the city.

The UAE, according to a senior Emirati official, announced the drawdown is intended to support a shaky United Nations-brokered ceasefire in Hudaydah that came into effect in December.

The drawdown, the daily said, is “a belated recognition that a grinding war that has killed thousands of civilians and turned Yemen into a humanitarian disaster is no longer winnable”.

The Associated Press also quoted experts as saying that the troop drawdown aims to restore the Persian Gulf country's reputation, even though it may strain ties with Saudi Arabia at a time of heightened tensions with Iran.

“The Emiratis are driven mostly by their desire to exit a war whose cost has become too high, even if it means angering their Saudi allies,” the newspaper added.

According to Fars News Agancy, the paper quoted Mike Hindmarsh, a retired Australian major general who commands the Emirati presidential guard, recently telling Western visitors that Yemen had become a quagmire where the Houthis were the “Yemeni Viet Cong”.

The drawdown “is going to expose the Saudis to the reality that this war is a failure”, stated Michael Stephens of the Royal United Services Institute, a research group in London.

“It tells us the two main protagonists on the coalition side, Saudi Arabia and the United Arab Emirates, don’t have the same idea of what success looks like,” he told The Times.

According to diplomats, the Saudis were “deeply disappointed” by the Emirati decision.

“Top officials with the royal court personally intervened with the Emirati leaders to try to dissuade them from the drawdown,” a Western diplomat familiar with the matter was quoted as saying.

The Emiratis have avoided publicly announcing their decision in part to minimize the unhappiness of the Saudis, noted several people briefed by the Emiratis.

Western diplomatic sources announced in late June that the UAE was scaling back its military presence in Yemen as worsening US-Iran tensions “threatened security closer to home”, according to Reuters.

The war has been unsuccessful to this day, and reports have revealed cracks in the coalition in the form of differences between Hadi and the UAE, which has reportedly gained oversized influence in southern Yemen.

Tensions between Riyadh and Abu Dhabi — yet to play out in full display — could have major consequences for the Saudi-led coalition, which has for more than four years been fighting a war it hoped to finish in a matter of weeks.

In May, the UAE reportedly deployed dozens of Southern separatists on the Yemeni island of Socotra in the Arabian Sea as divisions grew in the Saudi-led coalition over Abu Dhabi’s military build-up on the strategic island.

Citing sources close to Hadi, the Middle East Eye news website earlier reported that Hadi was angry at Emirati forces for acting “like an occupation power” in Yemen.

France, the United States, the United Kingdom and some other Western countries have faced criticisms over arms sales to the Saudi Arabia and the UAE, whose aggression against Yemen has affected 28 million people and caused what the United Nations calls “one of the worst humanitarian crises in the world". According to the world body, Yemen is suffering from the most severe famine in more than 100 years.