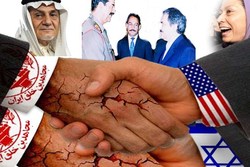 Iranian Ambassador and Permanent Representative to the United Nations Majid Takht Ravanchi told a UNSC meeting that more than 17,000 civilians of his country have been killed by Mojahedin-e Khalq Organization (MKO), a terrorist group sponsored by the US and Saudi Arabia.

RNA - Addressing a UN Security Council meeting entitled “Threats to international peace and security: Linkage between international terrorism and organized crime” in New York on Tuesday evening, Takht Ravanchi described Iran as a victim of terrorism and extra-national organized crime, stating that the MKO, supported by some regional and European countries, is working closely with the US intelligence service in a bid to descend Iran into chaos.

“Even though terrorists and organized criminals differ in their motives and methods, they are similar to one another concerning the repercussions of their acts, which are total disruption and comprehensive destruction,” he added.

He went on to say that Iran has been a victim of terrorists and international organized criminals, and has been a pioneer in the fight against them.

“The MKO terrorist group, which bears responsibility for the death of more than 12,000 Iranian civilians, is currently being sponsored by a number of regional counties and several states in Europe. (The United States of) America has provided its members refuge after removed the group from its list of designated terrorist organizations. The US intelligence service is working closely with them in order to hatch conspiracies of destruction in Iran,” the Iranian diplomat pointed out.

The MKO is listed as a terrorist organization by much of the international community. Its members fled Iran in 1986 for Iraq, where they received support from then dictator Saddam Hussein.

The notorious outfit has carried out numerous attacks against Iranian civilians and government officials for several decades.

In 2012, the US State Department removed the MKO from its list of designated terrorist organizations under intense lobbying by groups associated to Saudi Arabia and other regimes adversarial to Iran.

A few years ago, MKO members were relocated from their Camp Ashraf in Iraq’s Diyala Province to Camp Hurriyet (Camp Liberty), a former US military base in Baghdad, and were later sent to Albania.

Those members, who have managed to escape, have revealed MKO's scandalous means of access to money, almost exclusively coming from Saudi Arabia.

Takht Ravanchi then pointed to Iran’s cooperation with Iraq and Syria in its fight against the ISIL Takfiri terrorists, emphasizing that Iran’s military presence in both countries is based on requests by their legal governments.

The Iranian UN ambassador also made a reference to his country’s   leading role in fighting drug trafficking, saying that more than 39 percent of world narcotics in 2017 were discovered by Iran.

“Over the past 40 years, Iran has lost 3,815 members of the law enforcement forces during anti-drug operations. More than 12,000 people have been injured as well,” he said.

Takht Ravanchi finally called on the international community to support Iran in the fight against illegal drugs without any preconditions, discrimination and political considerations.

Last month it was revealed that the MKO had informed its members that it welcomed a plan to assassinate a senior Iranian military commander and the country’s new Judiciary chief, a recent internal communiqué of the terror group disclosed.

The terrorist organization said it would “welcome” their assassination, adding that it desired for the ranking officials to “join” Asadollah Lajevardi, Tehran’s former chief prosecutor, and Ali Sayyad-Shirazi, a former commander of the Iranian Army’s Ground Forces during Iraq’s 1980-88 war against Iran.

Earlier in June, a leaked audio of a phone conversation between two members of MKO, revealed Saudi Arabia has colluded with the MKO elements to frame Iran for the recent tanker attacks in the Persian Gulf.

In the audio, which is being released by the Iran Front Page for the first time, Shahram Fakhteh, an official member and the person in charge of MKO’s cyber operations, is heard talking with a US-based MKO sympathizer named Daei-ul-Eslam in Persian, IFP news reported.

In this conversation, the two elements discuss the MKO’s efforts to introduce Iran as the culprit behind the recent tanker attacks in the Persian Gulf, and how the Saudis contacted them to pursue the issue.

“In the past week we did our best to blame the [Iranian] regime for the [oil tanker] blasts. Saudis have called Sister Maryam [Rajavi]’s office to follow up on the results, [to get] a conclusion of what has been done, and the possible consequences,” Fakhteh is heard saying.

“I guess this can have different consequences. It can send the case to the UN Security Council or even result in military intervention. It can have any consequence,” Daei-ul-Eslam says.

According to Fars News Agency, attacks on two commercial oil tankers in the Gulf of Oman on June 13, and an earlier attack on four oil tankers off the UAE’s Fujairah port on May 12, have escalated tensions in the Middle East and raised the prospect of a military confrontation between Iran and the United States.

The US, Saudi Arabia, and the UAE have rushed to blame Iran for the incidents, with the US military releasing a grainy video it claimed shows Iranian forces in a patrol boat removing an unexploded mine from the side of a Japanese-owned tanker which caught fire earlier this month.

It later released some images of the purported Iranian operation after the video was seriously challenged by experts and Washington’s own allies.

The MKO which is said to be a cult which turns humans into obedient robots, turned against Iran after the 1979 Revolution and has carried out several terrorist attacks killing senior officials in Iran; yet the West which says cultism is wrong and claims to be against terrorism, supports this terrorist group officially.

After the Islamic Revolution in 1979, the MKO began its enmity against Iran by killings and terrorist activities.