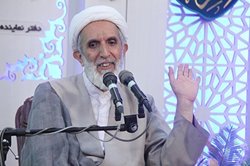 Hujjat al-Islam Mahdi Taeb‎ said the main goal for the implementation of the Statement on ‎the Second Step of the Islamic Revolution‎ is the duty of the youth who must enter the ‎battlefield with all power to deliver the statement to the hands of the revolutionaries of the ‎world.‎

RNA – Speaking during one of a series of meetings on a plan to strengthen religious beliefs ‎and theological principles on the issue of the Statement on the Second Step of the Islamic ‎Revolution, Hujjat al-Islam Mahdi Taeb, the chairman of the Central Council of the Ammar ‎Camp, said that this statement is a key and strategic statement and added, “The Supreme ‎Leader worked hard to organize this statement and spent a lot of time doing so. Therefore, ‎he intended that it should be repeatedly studied, analyzed and discussed so that its content ‎is more clearly visible and ultimately it can be established as the light of the future for ‎everyone.”‎
‎ ‎
The teacher in the Islamic Seminary of Qom noted that the intended audience of the ‎Statement of the Statement on the Second Step of the Islamic Revolution‎ wasn’t only the ‎Islamic Republic or the Islamic system and noted, “If the statement is well-studied and ‎analyzed, we will find that its main audience is all the countries of the world and this is a sign ‎of the wide perspective of this wise scholar.” ‎

His Eminence stated that the Islamic Revolution was issued to the heart of Israel, said, ‎‎“Today, there is conflict between Jews of African and European origin is in Israel and this ‎hasn’t been silenced. They say “why there is there racial discrimination in this country? This ‎shows you they have increased the knowledge of anti-racism.”‎
‎ ‎
He pointed out that the Supreme Leader’s objective in regard to the publication of this ‎statement was to create a storm in this world which leads to absolute victory on the side of ‎the world and stated, “The main burden of implementing the Statement on the Second Step ‎of the Islamic Revolution is on the shoulders of the youth. It must be possible to enter the ‎battlefield with all power to bring the statement to the hands of the revolutionaries of the ‎world.”‎
‎ ‎
In conclusion, Hujjat al-Islam Taeb said, “If we want to understand the Statement on the ‎Second Step of the Islamic Revolution and its relationship with the youth, we must know the ‎purpose of the Islamic Revolution, the main purpose of which is the advent of the Imam of ‎the Time [Imam al-Mahdi], and in this statement the determination of this goal is important.”‎

Tags: Mahdi Khamene Second Step
Short Link rasanews.ir/201s16
Share
0
Please type in your comments in English.
The comments that contain insults or libel to individuals, ethnicities, or contradictions with the laws of the country and religious teachings will not be disclosed