US leverage of power over Iran has been incapacitated‎ 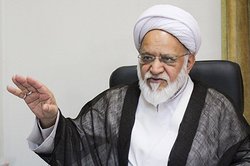 A member of the Expediency Council said that all of the leverage of power that the ‎United States has had over Iran has been incapacitated, His Eminence ‎said, “No leverage ‎that the United States has used against Iran remains.” ‎

RNA – In an exclusive interview with Rasa News Agency, Hujjat al-Islam Gholam-Reza ‎Mesbahi-Moqaddam, a member of the Expediency Council, referred to the foolish act of the ‎United States regarding its imposition of sanctions on the Supreme Leader of the Islamic ‎Revolution, Ayatollah Khamenei, and said, “Such actions indicate the end of the line of power ‎and capabilities of the United States to impose pressure on the Islamic Republic of Iran.”‎

Hujjat al-Islam Mesbahi-Moqaddam pointed out that the United States has imposed ‎sanctions on a personality who has a special status in the world and is particularly popular in ‎the Middle East region.‎
‎ ‎
His Eminence stated that the American actions against the Supreme Leader were carried out ‎due to their inability and incapacity and said, “The imposition of sanctions on the Supreme ‎Leader ‎is an action that will have no effect because he never uses American financial and ‎banking resources that the Americans want to do sanction him for.” ‎

Pointing out that the imposition of sanctions on the Supreme Leader ‎by the United States‎ is ‎a foolish and ridiculous act, he said, “When the Supreme Leader ‎resides in a house that he ‎doesn’t personally own and while using minimal conveniences and amenities, these sanctions ‎are futile and nonsensical from a financial perspective.” ‎

These sanctions will reportedly deny the Supreme Leader’s office and other Iranian officials ‎‎access to financial instruments.‎

Tags: Mesbahi USA Iran Khamenei Sanctions
Short Link rasanews.ir/201s0w
Share
0
Please type in your comments in English.
The comments that contain insults or libel to individuals, ethnicities, or contradictions with the laws of the country and religious teachings will not be disclosed