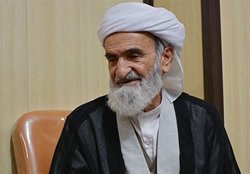 Mamousta Abdul-Rahman Khodaei‎ described the implications of the United States’ sanctions ‎on the Supreme Leader and other Iranian officials as “ineffective” and added, “The plots of ‎the United States will be doomed to failure and will lead to further embarrassment and ‎scandal for them.”‎

RNA – In an exclusive interview with Rasa News Agency, Mamousta Abdul-Rahman Khodaei, ‎a representative of the Sunni Muslims of Kordestan province in the Assembly of Experts, ‎condemned the sanctions imposed by the United States government on the Supreme Leader ‎of the Revolution, Ayatollah Sayyed Ali Khamenei, and other Iranian officials and said, “We ‎cannot expect anything except such actions from the enemies because if didn’t they partake ‎in such actions, their hostility wouldn’t be proven.” ‎

The Iranian Sunni politician continued, “The enemies don’t neglect any sort of falsehood in ‎terms of expressing their hostility and confrontation against the Iranian people and will ‎engage in any sort of action to pressure the people.”‎
‎ ‎
Referring to the brilliant leadership of the Supreme Leader and his challenging of the ‎conspiracies of the arrogant powers of the world through his wise tactics and planning, Mr. ‎Khodaei‎ pointed out, “All praise be to God, the Supreme Leader’s guidelines are very ‎strategic and precise and with the guidance he has given, the Iranian nation has been guided ‎towards greater dignity.” ‎

He noted that the enemies are angry to see the popularity and wise leadership of Ayatollah ‎Khamenei and try to challenge him through any action but they won’t succeed.‎
‎ ‎
Mr. Khodaei described the foolish sanctions imposed on the Supreme Leader as ineffective ‎and stated, “This American plots will be doomed to failure and will lead to further ‎embarrassment and scandal for them.”‎

These sanctions will reportedly deny the Supreme Leader’s office and other Iranian officials ‎access to financial instruments.‎

Tags: Mamousta Abdul-Rahman Khodae Kordestan Sunni Iran Khamenei Sanctions
Short Link rasanews.ir/201s0t
Share
0
Please type in your comments in English.
The comments that contain insults or libel to individuals, ethnicities, or contradictions with the laws of the country and religious teachings will not be disclosed