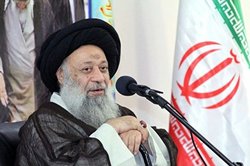 RNA – On July 9th, Hujjat al-Islam Sayyid Alaa Jazayeri, the deputy secretary-general of ‎Iraq’s Harakat Hezbollah al-Nujaba, met with Ayatollah Sayyed Mohammad-Ali Mousavi-‎Jazayeri, the head of the Islamic Seminaries of Ahvaz (the capital of Iran’s southwestern ‎province of Khuzestan). ‎
‎ ‎
During this visit, the Ayatollah Jazayeri expressed appreciation for the role of Iraqi Popular ‎Mobilization Forces in defending the weak and oppressed people and the Holy Shrines, as ‎well as raising the flag of resistance.‎
‎ ‎
The representative of the people of Khuzestan province in the Assembly of Experts offered ‎his congratulations to the Iraqi Islamic resistance forces and said, “The commitment to the ‎Line of Wilayah (Guardianship) is a pivotal point in protecting the Islamic Ummah.”‎
‎ ‎
Ayatollah Jazayeri‎ emphasized, “The commands and statements of the Supreme Leader of ‎the Islamic Revolution [Ayatollah Khamenei] must be pursued in a continuous manner.”‎
‎ ‎
His Eminence said, "It’s imperative that the valuable words of the Supreme Leader be ‎implemented as a roadmap among the Popular Mobilization Forces.”‎

It is noteworthy that Ayatollah Jazayeri has traveled to Qom to meet sources of emulation ‎and various political and religious figures. ‎