Qom is a bone in the enemies’ throats 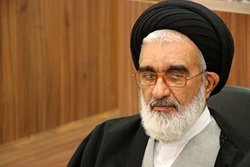 The custodian of the Holy Shrine of Lady Fatimah al-Ma’sumah ‎added, “Qom is also the holy ‎shrine of the Ahl al-Bayt and it’s protected by ‎the people. Qom has become a bone in the ‎enemies’ throats.”

RNA – Speaking at a conference entitled “Enjoiners of the Good and Forbidders of the ‎Wrong” which was organized by the Imam Sadeq Brigades of the Islamic Revolutionary ‎Guard Corps (IRGC), Ayatollah Sayyed Mohammad Sa’idi offered his congratulations on the ‎occasion of the Ten Days of Dignity and the birth anniversary of Lady Fatimah al-Ma’sumah.‎

The custodian of the Holy Shrine of Lady Fatimah al-Ma’sumah ‎noted that the Umayyad ‎Dynasty attempted to turn Madinah – the holy shrine of the Prophet Muhammad – into a ‎centre of corruption and said, “In another incident, when Imam Ja’far al-Sadiq participated in ‎a gathering with his companions, the owner of the house had someone be given wine who ‎requested water. This person’s action wasn’t against the Imam, but such cases were normal ‎at that time.”‎
‎ ‎
He stated that as a holy shrine, Qom has creational and legislative orientations, said, “The ‎creational orientation in the hands of God and the legislative orientation is in the hands of the ‎people. If the people don’t observe the legislative orientation, the Madinah of the Prophet ‎will be transformed into the Madinah of the Al Saud. God called Makkah an ‘abode of safety’ ‎and because the people didn’t observe the legislative orientation, the city became a temple ‎of idolatry and their idols were broken with the efforts of the Prophet Muhammad and Imam ‎Ali but the protection of its honour on the earth was in the hands of the people and if it isn’t ‎observed, it will fall to the Al Saud.”‎
‎ ‎
Ayatollah Sa’idi added, “Qom is also the holy shrine of the Ahl al-Bayt and it’s protected by ‎the people. Qom has become a bone in the enemies’ throats and if Syria, Lebanon, Kufah, ‎Karbala and other holy cities remain, it’s for the sake of Qom. There are representatives of ‎more than a hundred countries in this city who want to acquire these features from Qom.”‎
‎ ‎
The representative of the Supreme Leader of the Islamic Revolution in Qom province argued ‎that some unknowingly entered the battlefield of sacrilege and added fuel to the fire were ‎said, “There are, of course, hands under the ashes and they are the main instigators ‎who ‎have ‎been struggling on both fronts – meaning, the main instigators ‎and the people who ‎have ‎been placed in this atmosphere.‎ If they achieve their goals, they want to realize in ‎Qom what they did in Madinah during the time of Imam al-Sadiq, but due to the grace of ‎God and the people’s efforts, this will not happen. ‎

Ayatollah Sa’idi ‎stressed that dealing with individuals must be appropriate to them and ‎stated, “The treatment of the main instigators and deceptive agents must not be done in the ‎same manner because the enemies are waiting for the deceived individuals to be treated in ‎such a way that they are attracted to their side. Therefore, the relationship of the believers ‎with such people is very important. Of course, dealing with the main perpetrators must also ‎be decisive so that the position of the Law Enforcement Force is determined in this ‎circumstance.”‎

Tags: Saidi Qom Masumah Ahl al-Bayt
Short Link rasanews.ir/201rzf
Share
0
Please type in your comments in English.
The comments that contain insults or libel to individuals, ethnicities, or contradictions with the laws of the country and religious teachings will not be disclosed