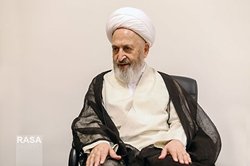 In a letter to the Grand Mufti of Oman, Ayatollah Sobhani emphasized the dangerous ‎dimensions of establishing relations with the Zionist regime and offered suggestions on ‎strengthening the unity of the Islamic Ummah.‎

RNA – Ayatollah Ja’far Sobhani wrote a letter to Shaykh Ahmad ibn Hamad al-Khalili, the ‎Grand Mufti of the Sultanate of Oman, wherein he emphasized the dangerous dimensions of ‎establishing relations with the Zionist regime and the need for the Omani authorities to be ‎informed of the dangers of this action by the scholars of their country and offered proposals ‎to strengthen the unity of the Islamic Ummah.‎

A summary of the most important parts of the text of this letter is as follows:‎

We met with Shaykh Jibraili of the Sultanate of Oman, who carried your precious gift – ‎namely the message “Where is the Islamic Ummah?” – and in that letter, your practical ‎response to our suggestion for the holding a conference on the sedition of takfir (apostasy) ‎which has been promulgated among the children of the Islamic Ummah due to ignorance of ‎the principles of Islam and the standards of faith and disbelief. ‎

In your precious message, you described this disease and its cure. May God acknowledge ‎your valuable efforts in inviting the unity of the Islamic Ummah.‎

But with regard to this letter, a suggestion came to my mind – I am hopeful that this will be ‎acceptable to you and will be included in future versions of this message. ‎

In one section, you have brought a hadith from Abdullah ibn ‎‎Umar from the Prophet ‎Muhammad about Khaybar. [Here, Ayatollah Sobhani mentions that the Grand Mufti of ‎Oman should have explained the unmatched role of Imam Ali in the Battle of Khaybar and ‎noted: “Referring to Imam Ali causes dignity and blessing.”]‎

We honour and value your strong regret that Muslims have forgotten their biggest issue, the ‎issue of Palestine and are buried under a “heap of sedition” in regard to this issue. ‎

Of course, I was very pleased about this. However, the content that the media has ‎broadcast in regard to the creation of a proper platform for establishing relations with the ‎Zionist regime in Oman is questionable. Therefore, the zealous scholars of Islam, especially ‎Your Excellency, must be responsible in regard to the danger that such action, corruption ‎and damage caused to Islam and the Muslims.‎
‎ ‎
Your message conveys the right of the issue about the sedition of takfir, in which there are ‎comprehensive and diligent advice for the pure hearts and listening ears but what must be ‎considered is the condemnation of those who financially sponsor Takfiri groups. Where do ‎they get these deadly weapons and these devastating military provisions from?‎

Tags: Sobhani Omar Takfir Israel Zionist
Short Link rasanews.ir/201rzK
Share
0
Please type in your comments in English.
The comments that contain insults or libel to individuals, ethnicities, or contradictions with the laws of the country and religious teachings will not be disclosed