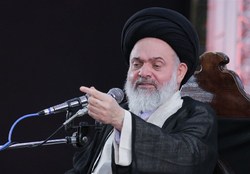 Ayatollah Hoseyni-Bushehri ‎said that Europeans didn’t even take one step to protect the ‎JCPOA and added, “By implementing the second step of reducing commitments, Iran doesn’t ‎recognize any limits to enrich uranium.”‎

RNA – In his Friday prayer sermon to a large and fervent crowd of believers in Qom’s Quds ‎‎‎‎Prayer Hall, Ayatollah Seyyed Hashem Hoseyni-Bushehri ‎stressed upon the revival of the ‎Islamic commandment of “enjoining the good and forbidding the wrong” in society and said, ‎‎“Every program that is contrary to social justice is an example of wrongdoing and must be ‎forbidden.”‎
‎ ‎
The member of the board of directors of the Assembly of Experts ‎added, “Some of the ‎barriers to the implementation of social justice are related to the officials and some others ‎are due to the people. The officials and executors of society must remove the barriers to ‎social justice. The first obstacle for the managers and officials is that sometimes managers ‎don’t have the right to hear the truth and they aren’t familiar with the realities of society.”‎
‎ ‎
He ‎described the Hajj a source of love, fraternity and affection between Muslims and added, ‎‎“The Supreme Leader ordered that the ranks of the Islamic Ummah to unite. After that, the ‎worship of Hajj is very important and the Hajj pilgrims must strive and make use of these ‎spiritual opportunities. Also, the hosts of the pilgrims must place the protection of the safety ‎and dignity of the Hajj pilgrims on their agenda.”‎

Referring to the anniversary of United States Navy’s strike on Iran Air Flight 655 which ‎occurred on July 3, 1988, Ayatollah Hoseyni-Bushehri ‎called for an explanation of American ‎human rights and ‎added, “The criminal case of the United States has been very black from ‎August 19, 1953 [the overthrow of the democratically elected Iranian Prime Minister, ‎Mohammad Mosaddegh] until today and a week or a month hasn’t gone by where we ‎haven’t witnessed a crime against Iran and the Islamic Ummah. There is a long list of ‎American criminal and anti-humanitarian actions but through these criminal actions, the ‎United States accuses other countries of not respecting human rights and imposes pressure ‎on them through various means.”‎

The secretary of the Supreme Council of the Islamic Seminary referred to the disloyal actions ‎of the opposing sides in regard to the Joint Comprehensive Plan of Action (JCPOA) and said, ‎‎“It has been one year since the United States withdrew from the JCPOA and since that day, ‎they have imposed a number of sanctions on us. The expectation of the officials was that ‎the European countries would fulfill the rights and demands of Iran but behind the podium, ‎the Europeans were saying that the JCPOA must remain intact but they didn’t even take one ‎step on this path.”‎
‎ ‎
He ‎added, “After a year of patience on the part of the Islamic system, it was decided that if ‎the opposing sides didn’t comply with their obligations, they would reduce their obligations. ‎We have already taken two actions and in two days we will pursue the reduction of the ‎second step of our obligations. Henceforth, we don’t recognize any limits to enrich uranium. ‎In regard to the issues of enrichment and Arak, we will return to the pre-JCPOA situation.”‎

Ayatollah Hoseyni-Bushehri said, “The strategy of the enemies is to impose pressure on the ‎Iranian people and the officials in order to force the officials to negotiate. One once hand, ‎they impose sanctions and on the other hand, they speak about negotiations.”‎
‎ ‎
The vice-president of the Society of Seminary Teachers of Qom ‎condemned the foolish ‎actions of the United States in sanctioning the Supreme Leader of the Islamic Revolution ‎‎(Ayatollah Khamenei) and continued, “One of the things that demonstrates the irrationality of ‎the Americans is the sanctioning ‎of the dear and wise Supreme Leader. The Americans don’t ‎know Iran, the region, the world and the imam and leader of the community.”‎
‎ ‎
He has said, “A person like the Supreme Leader, who has millions of followers around the ‎world, is not afraid of the threats. This same experience was done during the Shah’s time so ‎that the funds wouldn’t reach the Imam but the people moved against the demands of the ‎tyrants and the result was the victory of the Islamic Revolution.”‎

Ayatollah Hoseyni-Bushehri ‎said, “The fact that you sanction the Supreme Leader is ridiculed ‎by the Iranian people because they wonder what goes on in the heads of the American ‎officials that they act like this. We want to have the support of the Islamic world, the nation ‎of Iran, the Islamic Seminaries, the sources of emulation and the personalities of the Islamic ‎world and the United States will repent and regret it what it has done a thousand times ‎over.”‎