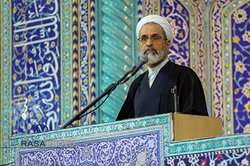 Ayatollah Arafi ‎praised the courageous actions of the IRGC in targeting the American spy ‎drone and stressed, “We aren’t a people of war but we will make any aggressor regret their ‎actions.”‎

RNA – In his Friday prayer sermon to a large and fervent crowd of believers at Qom’s ‎Qods ‎‎‎‎‎Prayer Hall, Ayatollah Alireza Arafi ‎referred to the visit of the Shinzō Abe, the Prime Minister ‎of Japan, with Ayatollah Khamenei, the Supreme Leader of the Islamic Revolution, and said, ‎‎“We must all be proud of the great epic which occurred in the small and simple room of the ‎Supreme Leader ‎during his conversation the Prime Minister of Japan. It demonstrated the ‎frankness and courage of the Supreme Leader ‎at the level of the magnificence of the century ‎and historical greatness. We thank God for this great blessing, this diplomacy was a symbol ‎of a diligent, wise and revolutionary diplomacy against the enemies of the Iranian nation.”‎

The head of the Islamic Seminaries of Iran ‎said, “Our diplomacy must see its objective as a ‎principle that has been manifested in the discussion between the Supreme Leader with the ‎Prime Minister of Japan. The symbol of this diplomacy is effective, revolutionary and ‎influential and all statesmen and institutions must be inspired by his dignity, wisdom, ‎rationality, courage and clarity and God-willing, the enemies will be pushed back with ‎abjection and infamy.”‎

He referred to the discovery and destruction of a vast and complex online spying and ‎intelligence network carried out by American security and intelligence agencies and said, ‎‎“Many of the world’s spy organizations were surprised by Iran’s technological advancements ‎and infiltration into the cyber networks ‎of the United States. A large amount of work was ‎done and the great evil of the country was repulsed and the country’s scientific and ‎technological strength was displayed to enemies.”‎
‎ ‎
Ayatollah Arafi offered his appreciation to the Islamic Revolutionary Guard Corps (IRGC) for ‎their “courageous targeting” of the United States’ ultra-advanced UAV and said, “The IRGC ‎defended the security of Iran’s borders with great courage and demonstrated that it’s ‎prepared in the face of the advanced weapons and the series. Contrary to the imagination of ‎the aggressors of the world, Iran demonstrated that it has an advanced system and with ‎divine help, it will defend the Islamic Revolution and Iran against any sort of aggression with ‎power and courage.”‎
‎ ‎
The member of the Society of Seminary Teachers of Qom‎ emphasized, “The politics and ‎approach of the powerful country of Iran, its great people and its great leader are directed ‎at standing against the invasion. We aren’t a people of war but we’re prepared against any ‎aggression and we will make any aggressor regret their actions. We stand against the ‎economic, military, security and intelligence terrorism of the enemies. Contrary to their ‎imagination today – due to their betrayal, villainy and malice – the clear slogan of Islam, the ‎Revolution and the people, namely, ‘Down with America,’ is still resonant.”‎
‎ ‎
In regard to the floods which hit 26 of Iran’s 31 provinces from mid-March to April, Ayatollah ‎Arafi ‎called for jihadi forces, the people and organization to pay attention to the flood ‎victims and added, “Reports from the flood-stricken areas show that the presence and ‎assistance of the people has decreased. The flood victims, especially in Khuzestan and ‎Lorestan are suffering greatly. Unfortunately, the promises made have not been ‎implemented, which must be handled by the officials.”‎