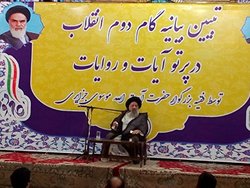 Ayatollah Mousavi-Jazayeri‎ said that the younger generation is the main focus of the ‎Statement on the Second Phase of the Islamic Revolution and added, “This statement must ‎be put into operation in society.”‎

RNA – In a lecture explaining the Quranic and narrative principles of the Statement on the ‎Second Phase of the Islamic Revolution, Ayatollah Sayyed Mohammad-Ali Mousavi-Jazayeri, ‎the head of the Islamic Seminaries of Ahvaz, emphasized the necessity for the young people ‎to have greater contact with the Islamic Seminaries and said, “During the days of the ‎‎[spring] floods, in addition to the activities of the government agencies, we witnessed the ‎establishment of a fundraiser organized by the seminaries, which was well-welcomed by the ‎people and much aid and contributions were sent to it and which were distributed among the ‎flood victims.”‎
‎ ‎
The representative of the people of Khuzestan province in the Assembly of Experts referred ‎to the Statement on the Second Phase of the Islamic Revolution issued by the Supreme ‎Leader of the Islamic Revolution, Ayatollah Khamenei, and described him as a ‎compassionate, good and righteous father of the people of Iran and stated, “The statement ‎of the Supreme Leader ‎creates an obligation for all people and we, in turn, feel obligated ‎and we are working on building it in society.”‎

He said that the Statement on the Second Phase of the Islamic Revolution must be put into ‎operation and added, “Since the Iranian people have come to mental maturity in ‎understanding different events. Therefore, they are the main target audience of the ‎statement. On the other hand, the guidance of the late Imam Khomeyni will remain until they ‎reach the desired point.” ‎

Ayatollah Mousavi-Jazayeri added, “During the revolutionary struggles, God granted the ‎Iranian people victory and humiliated the enemies by observing patience, endurance and ‎obeying the orders of the Supreme Leader. This issue is a divine tradition which will be ‎obtained by endurance and perseverance.” ‎

His Eminence stated that during the era of the Imposed War [Iran-Iraq War], the warriors ‎made retreating forbidden for themselves and added, “The result of such resistance was the ‎expulsion of the enemies and victory. Today, our nation has reached scientific and practical ‎maturity. Therefore, we will achieve our goals with strong will.”‎
‎ ‎
In another part of his speech, he said, “The younger generation is the main focus of the ‎statement of the Second Phase of the Islamic Revolution, a generation that was named ‎during the Shah’s era as the ‘Wandering Generation’ but today, they are generation which will ‎build the future and are the engine of society. They are a generation that we hope will build ‎society and see the advent of the sun of the justice of Imam al-Mahdi.”‎
‎ ‎
Ayatollah Mousavi-Jazayeri explained that the building of civilization is being achieved with ‎science, technology, creativity and research and added, “The younger generation has the ‎greatest role to play in building civilization. However, research and creativity in such a ‎generation must be pursued from childhood through the efforts and attention of education ‎and training to the issue of research.”‎

In conclusion, he mentioned the personality of the Supreme Leader as the author of the ‎statement on the Second Phase of the Islamic Revolution and stated, “When the Supreme ‎Leader was living in Mashhad at was 25 years of age, he was the political axis of Islamic ‎thought among the seminarians and educated people.”‎

Tags: Jazayeri Mousavi Khamenei
Short Link rasanews.ir/201rti
Share
0
Please type in your comments in English.
The comments that contain insults or libel to individuals, ethnicities, or contradictions with the laws of the country and religious teachings will not be disclosed