Arba’in is a special opportunity for cultural activities 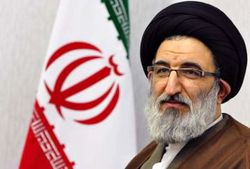 The Friday prayer leader of Karaj called Arba’in “the peak of the emergence of love and ‎devotion to the Ahl al-Bayt”‎ and said addressing cultural and positive activities during the ‎Arba’in is of particular importance‎.‎

RNA – A meeting of the Policy Board of the Organization For the Reconstruction of the Holy ‎Shrines of Iraq in Alborz ‎Province was held on June 18th at the Friday prayer leader’s office ‎in Karaj.‎

At the beginning of the meeting, Soleyman Shokri, the head of the Organization For the ‎Reconstruction of the Holy Shrines of Iraq in Alborz ‎Province, presented a report on the ‎ongoing projects, gifts and vows of the people of the province to help develop, expand, ‎construct and rebuild the holy shrines and establish mawkibs (mourning organizations) during ‎the Arba’in pilgrimage in Iraq. ‎
‎ ‎
Ayatollah Seyyed Mohammad-Mahdi Hoseyni-Hamadani described the report presented as ‎‎“glade tidings of the performance of the province” and stated, “Our people have shown their ‎commitment to all aspects of human life since the arrival of Islam, and in particular, the ‎arrival of Shi’ism in Iran. Since the Islamic Revolution, which is derived from the movement ‎of Imam al-Husayn, until today, they have shown their devotion to the Ahl al-Bayt in all ‎respects and the deficiencies haven’t dissipated this devotion and the difficulty of livelihood ‎has prevented people from engaging in vows in any era.”‎
‎ ‎
The representative of the Supreme Leader of the Islamic Revolution [Ayatollah Khamenei] in ‎Alborz province added, “The argument of resistance, which has emphasized by the Supreme ‎Leader of the Revolution these days, is based on devotion to the Ahl al-Bayt and the Ahl al-‎Bayt also protected the religion through resistance.”‎

He considered Arba’in as the peak of the emergence of love and devotion to the Ahl al-Bayt ‎and stated, “Addressing cultural and positive activities during the Arba’in is of particular ‎importance. As a strategic move, Arba’in is an opportunity to export revolutionary and ‎religious values and therefore, its importance must not be overlooked.”‎

Ayatollah Hoseyni-Hamadani emphasized that the building up of the people during the ‎Arba’in pilgrimage is enduring its difficulties‎ and said, “In order to serve the pilgrims, we must ‎not comfort them. The mawkibs on the route must not become fixed structures. It’s better ‎to construct the tents at the desired time and then take them down later.” ‎

In conclusion, he said that in return for receiving funds for the reconstruction of the holy ‎shrines in the mosques, it’s necessary that such activities are done in an organized manner ‎and in coordination with the mosque administration and the prayer leader of the mosque and ‎must be carried out in accordance with the agreements made and communiqués.”‎

Tags: Hoseyni Hamadani Arab Iraq Shrines
Short Link rasanews.ir/201rth
Share
0
Please type in your comments in English.
The comments that contain insults or libel to individuals, ethnicities, or contradictions with the laws of the country and religious teachings will not be disclosed