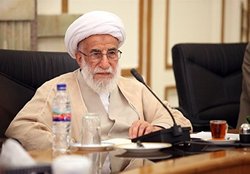 The chairman of the Guardian Council said that the Supreme Leader’s stance during his ‎meeting with the Japanese Prime Minister humiliated the government of the United States ‎and will remain ‎in history.‎

RNA – Speaking during a meeting of the Guardian Council on June 19th, ‎Ayatollah Ahmad ‎Jannati, the chairman of the Guardian Council, said that the name of some of the events and ‎personalities have always remained in history, including such personalities such as Hamzah ‎ibn Abdul-Muttalib, a companion and paternal uncle of the Prophet Muhammad, and Hadhrat ‎Abdul-Adhim al-Hasani, a fifth generation descendant of Imam Hasan ibn Ali and a ‎companion of Imam Muhammad al-Taqi, whose names have remained in Islamic history.‎
‎ ‎
The Iranian cleric and politician ‎referred to the recent visit of Shinzō Abe, the Prime Minister ‎of Japan, with Ayatollah Sayyed Ali Khamenei, the Supreme Leader of the Islamic ‎Revolution, and stated, “Just as the distinguished representatives of the Islamic Consultative ‎Assembly said in their statement of thanks, the sort of conduct and behaviour of the ‎Supreme Leader ‎with the Prime Minister of Japan was based on three principles – dignity, ‎wisdom and expediency.”‎

On June 12th, Japanese Prime Minister Abe arrived in Iran on a first visit by a Japanese prime ‎minister ‎to Tehran in more than forty years, with a plan to help ease tensions between the ‎Islamic Republic and the United States.‎
‎
During the meeting, Ayatollah Khamenei dismissed the President of the United States, Donald ‎Trump, as a person not worthy of a response or a message, stressing that negotiations with ‎Washington can’t solve any problem.‎