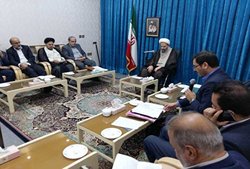 Rasa – Ayatollah Namazi ‎said, “The power of the people, managers and officials of the ‎Islamic Republic of Iran is due to Islam, Wilayah al-Faqih and the Supreme Leader.” ‎

RNA – Speaking at a meeting of the General Culture Council of Kashan, Ayatollah Abdonnabi ‎Namazi referred to the letter of the President of the United States, Donald Trump, to the ‎Supreme Leader of the Islamic Republic in which he expressed willingness to negotiate with ‎Iran and said, “The stance of the Supreme Leader of the Islamic Revolution [Ayatollah ‎Khamenei] in response to Trump’s letter is greater than land power.”‎

The representative of the Supreme Leader in Kashan added that the Supreme Leader’s ‎response to Trump’s letter had a greater affect than one atomic bomb on public opinion and ‎among government officials, politicians, analysts, academics and international researchers.‎

He described the Supreme Leader’s statements in response to the United State’s position ‎and Trump’s letter as “hard-hitting and decisive” and said, “God bestowed upon us the ‎greatest blessings – Islam and faith – and we must appreciate Islam, Wilayah al-Faqih ‎‎[Guardianship of the Jurisprudent], the Supreme Leader, the Islamic Revolution, system and ‎the country.”‎
‎ ‎
Ayatollah Namazi described the people of Iran as “good, grateful, patient and resistant” and ‎said, “The heroic people of Iran have endured all the hardships of eight years of war and ‎martyrdom and after that, they endured the imposition of sanctions, threats and economic ‎warfare by the enemies and the economic problems of the country and stand firmly in ‎support of the Islamic Revolution, the system, wilayah and Islam.”‎

His Eminence stated, “For various reasons, we can’t make use of all of the divine rulings. ‎The dignity that the heroic people of Islamic Iran have today is due to their practice of some ‎of the divine rulings, one of which is the subject of martyrdom. For this reason, Imam ‎Khomeyni said that the nation that has martyrdom isn’t captive.”‎
‎ ‎
He continued, “Those who were educated and trained in the culture of Karbala and Ashura, ‎don’t fear any other power besides God and the enemies can’t force a people who seek ‎martyrdom to surrender.”‎
‎ ‎
Ayatollah Namazi emphasized, “If the command of ‘enjoining the good and forbidding the ‎wrong’ is isolated or marginalized and eliminated in an monotheistic and Islamic society, ‎nothing will remain of Islam. For this reason, Imam al-Sadiq said, ‘The command to enjoin ‎the good and forbid the wrong has two great precepts such that even prayer is revived in ‎the light of the command of enjoining the good and forbidding the wrong.”‎

In conclusion, His Eminence noted, “If Islam is correctly understood and it’s rulings are ‎properly implemented, it will be automatically and naturally exported, since understanding ‎the truth of the divine rulings will lead to a tendency toward Islam.”‎