In the shadow of resistance, the US can’t do a damned thing against us 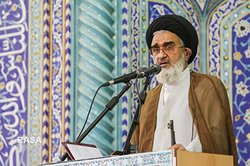 Rasa – Ayatollah Sa’idi said, “The response of our brave people, due to the favour of the ‎Imam of the Time [Imam al-‎Mahdi], is only resistance because it’s in the shadow of ‎resistance that the United States ‎can’t do a damned thing against us.”‎

RNA – In his Friday prayer sermon delivered to a large and fervent crowd of believers at ‎‎‎‎‎‎‎‎‎‎‎Qom’s Qods Prayer Hall, Ayatollah Sayyed Mohammad Sa’idi expressed confidence with the ‎people and said, “The Supreme Leader of the Islamic Revolution [Ayatollah Khamenei], with ‎his luminosity, profoundness and comprehensive analysis of the situation in the region, said ‎that no war will occur, nor will we negotiate – the logic of the Iranian nation is resistance.”‎
‎ ‎
The custodian of the Holy Shrine of Lady Fatimah al-Ma’sumah expressed the five arguments ‎of the Supreme Leader in relation to Iran’s resistance against the United States and said, “In ‎contrast to passivity, resistance is the source of power, action and advance against the ‎enemies. The experience of combating the enemies’ tricks in Syria and Iraq and the ‎experience of the power of Iran’s missiles, all suggests a brave, strong and influential logic ‎instead of a cowardly retreat by Iran.”‎
‎ ‎
He emphasized the courage, prestige and authority of the late Imam Khomeyni during the ‎Sacred Defence [Iran-Iraq War] and added, “Today, we see the same courage, insight and ‎power given consideration in the perspective of Ayatollah Khamenei and the greatness of the ‎Iranian nation against Trump’s rants and the response of our brave people, due to the ‎favour of the Imam of the Time [Imam al-Mahdi], is only resistance because it’s in the ‎shadow of resistance that the United States can’t do a damned thing against us.”‎
‎ ‎
Ayatollah Sa’idi ‎said, “The experience of the compromise of the Egyptian governments ‎against the United States, as well as the experience of Japan’s compromise and surrender ‎and negotiations with the United States that led to the bombing of Hiroshima are examples ‎of compromise between other countries against the United States and the West, which has ‎no other result but humiliation.”‎

The representative of the Supreme Leader of the Islamic Revolution in ‎Qom ‎expressed the ‎proof of divine promise is the victory of the front of truth against the enemies by the ‎Supreme Leader and said, “In the Quran, God Almighty said that ‘We will help the Muslims ‎against the enemies.’”‎
‎ ‎
He added, “In contrast to the weak-minded Westernized individuals who consider resistance ‎to be useless, it must be said that resistance isn’t only beneficial but also influential. For ‎example, the Islamic Resistance Axis is becoming stronger every day, and the Israeli-Zionist ‎regime is getting closer to its destruction every day.”‎
‎ ‎
Referring to the meeting between the Supreme Leader with Shinzō Abe, the Prime Minister of ‎Japan, Ayatollah Sa’idi ‎said, “The Supreme Leader said ‘I personally don’t consider Trump ‎worthy of exchanging any messages with, and don’t have and will not have any response for ‎him.’ This position of the Supreme Leader reflects the fact that Trump’s message was so ‎worthless that he didn’t consider Trump deserving of a response.”‎

The teacher in the Islamic Seminary of Qom ‎pointed out the unilateral withdrawal of the ‎United States from the Joint Comprehensive Plan of Action (JPCOA) and said, “Trump has ‎threatened the Iranian nation since the beginning of his presidency nothing has come out of ‎it and in his statements, the Supreme Leader has declared Trump’s irrationality, lying and ‎bullying to the whole world.”‎

He continued, “In the world, it’s possible that they may be afraid of the messages of ‎arrogant people such as Trump, but the Iranian people not only aren’t afraid ‎of these abject ‎messages, but they shout that ‘hayhat minna al-dhillah’ [‘we will never be humiliated’].”‎

Ayatollah Sa’idi ‎said that the United States’ calls for negotiations are a factor in further ‎pressure on the Iranian people and said, “We stand firmly on our own strategic position and ‎this strategic position is the slogan ‘Down with America.’”‎

Tags: Saidi Friday Khamenei Japan Qom
Short Link rasanews.ir/201rrw
Share
0
Please type in your comments in English.
The comments that contain insults or libel to individuals, ethnicities, or contradictions with the laws of the country and religious teachings will not be disclosed