Enemies seek to negotiate through the weapon of economic pressure ‎ 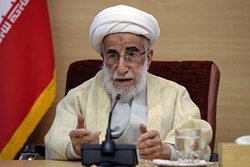 Rasa – The chairman of the Guardian Council said that the enemies are seeking to negotiate ‎through the weapon of economic pressure and noted, “Of course, this conspiracy will be ‎defeated by the Supreme Leader and the vigilance of the officials.”‎

RNA – Speaking during a meeting of the Guardian Council on June 21st, Ayatollah Ahmad ‎Jannati, the chairman of the Guardian Council, said, “Since its establishment, the Islamic ‎Revolution has faced issues and challenges and due to divine grace, the discernment of ‎Imam Khomeyni and the Supreme Leader of the Islamic Revolution [Ayatollah Khamenei] ‎and the accompaniment of the people, these issues have been overcome.” ‎

The Iranian cleric and politician cited one of these issues as facing the plots and crimes of ‎the United States against the Islamic Republic of Iran, saying, “The Americans have used ‎various weapons and means to pressure the Iranian people over the past forty years, all of ‎which have failed.”‎

He emphasized, “Today, they are also seeking to negotiate through the weapon of ‎economic pressure, which will surely be defeated by the discernment ‎of the Supreme Leader ‎and the vigilance of the officials.”‎
‎ ‎
In conclusion, Ayatollah Jannati called on executive officials to pay more attention to the ‎economic situation of the people and vulnerable groups.‎

Tags: Jannati Economics Iran
Short Link rasanews.ir/201rrv
Share
0
Please type in your comments in English.
The comments that contain insults or libel to individuals, ethnicities, or contradictions with the laws of the country and religious teachings will not be disclosed