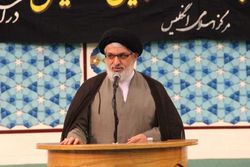 Rasa – Hujjat al-Islam Mousavi ‎will be appointed ‎as the new head of the Islamic Centre of ‎England and the representative of the Supreme Leader in the United Kingdom.‎

RNA – On Friday, June 14th, the Islamic Centre of England issued a letter of invitation to ‎scholars and believers to attend the farewell ceremony for Hujjat al-Islam Mohammad Ali ‎Shomali and the introduction of Hujjat al-Islam Sayyed Hashem Mousavi as the new ‎representative of the Supreme Leader of the Islamic Revolution, Ayatollah Khamenei, in the ‎United Kingdom‎.‎