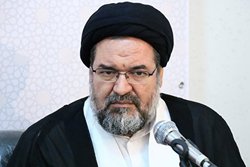 Rasa – The member of the jurisprudence council of the Central Bank ‎stated that the Islamic ‎Seminaries ‎are the most important element ‎of the implementation of Imam Khomeyni’s ‎theory of Wilayat al-Faqih in society.‎

RNA – In an exclusive interview with Rasa News Agency, Hujjat al-Islam Sayyed Abbas ‎Mousavian referred to the interaction between the Islamic Seminaries and the Islamic system ‎and said, “Imam Khomeyni rightly stated the theory of Wilayat al-Faqih (Guardianship of the ‎Jurisprudent) but its implementation in the society requires various aspects of political, ‎cultural, economic and artistic expression which haven’t been properly described to this day.‎‏"‏

The member of the jurisprudence council of the Central Bank said, “Unfortunately, the ‎organizations and institutions that can implement ‎an Islamic government in society, haven’t ‎created it. During the past forty years, religious elders and scholars have been involved in ‎the imposition of incidents on the country and the system, which has led to less attention ‎being paid to the theories of Imam Khomeyni.”‎

Hujjat al-Islam Mousavian stated that the Islamic Seminaries ‎are the most important element ‎of the implementation of Imam Khomeyni’s theory of Wilayat al-Faqih in society and said, ‎‎“In order for the Islamic Seminaries ‎to recognize this duty and to implement the theory of ‎Imam Khomeyni, they must identify the various aspects ‎and plan them appropriately into ‎sub-categories such as political, economic, cultural, artistic, and family.”‎
‎ ‎
His Eminence added, “Today, due to changes in the social life of mankind and the ‎transformations that have developed in different fields, there have also been changes in the ‎Islamic Seminaries. For example, during the past two hundred years when the economy was ‎spoken of, transactions quickly came to mind and the jurisprudents negotiated contracts in ‎transactions ‎but with the developments in the field of economics, organizations and ‎institutions are the contracting parties, whereas in the past, transactions were between two ‎people.”‎
‎ ‎
He added, “Therefore, in order to be able to help the system, the Islamic Seminaries must ‎abandon the central book and focus on the central organization, for example, a bank that ‎deals directly with people and the government must be examined.”‎
‎ ‎
Hujjat al-Islam Mousavian ‎referred to the duties of the system towards the Islamic ‎Seminaries and said, “For both theoretical and theoretical issues, the government must ‎interact with the Islamic Seminaries‎. From the theoretical point of view, a system needs to ‎be created in order to transfer the system’s needs to the Islamic Seminaries ‎and the Islamic ‎Seminaries’ efforts to the system, which unfortunately isn’t witnessed in the system today.”‎

Tags: Mousavian Seminaries Wilayat al-Faqih Khomeyni Iran
Short Link rasanews.ir/201rq1
Share
0
Please type in your comments in English.
The comments that contain insults or libel to individuals, ethnicities, or contradictions with the laws of the country and religious teachings will not be disclosed