We must not allow some to distort Imam Khomeyni’s lifestyle ‎ 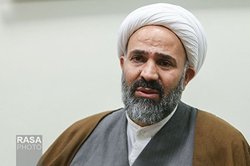 RNA – In an interview with Rasa News Agency, Hujjat al-Islam Nasrollah Pejmanfar, the ‎‎representative of the people of Mashhad in the Islamic Consultative Assembly, pointed to ‎the impeccable position of the late founder of the Islamic Revolution, Imam Sayyed ‎Ruhollah Khomeyni, in the hearts of the people and said, “The position of Imam Khomeyni ‎and his acceptance among the people was very special and unique to him because he was ‎able to quickly invite people toward God.”‎

The member of the Islamic Consultative Commission on Cultural Affairs emphasized on the ‎necessity of explaining different aspects of Imam Khomeyni’s lifestyle in society and stated, ‎‎“Today, we must be careful not to distort the Imam’s illuminated way of life and the reality ‎and truth of his existence and we must protect the movement of the Islamic Revolution for ‎ourselves and future generations.”‎
‎ ‎
He referred to the main attributes of the true followers of the Imam and said, “The true ‎followers of the late Imam are those who know his lifestyle well and implement it. In other ‎words, those who can be considered as the true followers of the Imam’s line are those who ‎have been able to maintain their adherence to his position after his death.”‎
‎ ‎
Hujjat al-Islam Pejmanfar‎ said that there were many people who were students of Imam ‎Khomeyni and claimed to follow him and with this same claim, many opportunities were ‎provided for them but at the same time they couldn’t maintain continuity and adherence to ‎the lifestyle of Imam in their actions.‎

Tags: Pejmanfar Pejmanfar Iran Lifestyle
Short Link rasanews.ir/201rpL
Share
0
Please type in your comments in English.
The comments that contain insults or libel to individuals, ethnicities, or contradictions with the laws of the country and religious teachings will not be disclosed