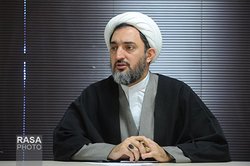 Rasa – Hujjat al-Islam Haj-‎Abolqasem-Dolabi said that the hypocrites of the Islamic Ummah ‎are those who support the Imam but don’t practice ‎their actions‎, said, “Anyone who follows ‎Imam Khomeyni’s line will be resolutely opposed to the enemies.”‎

RNA – In an exclusive interview with‏ ‏Rasa News Agency, Hujjat al-Islam Mohammad Haj-‎‎Abolqasem-Dolabi, the representative of the people of Zanjan in the Assembly of Experts, ‎‎offered his condolences on the death anniversary of the founder of Iran’s “massive” Islamic ‎Revolution, Imam Sayyed Ruhollah Khomeyni, and said, “It’s a continuous movement ‎against the pressure and excessiveness of the arrogant powers and domestic and foreign ‎enemies.”‎

The Iranian cleric and politician continued, “As long as the Islamic Revolution is faced with ‎the pressures imposed by the arrogant powers and domestic and foreign enemies‎, its ‎movement will not subside and will last.”‎

He stated that the continuation of the Islamic Revolution requires the continuation of the ‎views and conditions that govern it and said, “The conditions prevailing over the Islamic ‎Revolution ‎ require that the authorities and the agents have a complete and comprehensive ‎perspective around them and therefore, it’s natural that, if this happens, appropriate ‎behaviours will also fit into that perspective.” ‎

Hujjat al-Islam Haj-‎Abolqasem-Dolabi‎ stated that one of the main needs of the revolutionary ‎era was to explain the relationship between Imam and the Ummah and said, “The Imam is ‎the person who stands in front of the Ummah in the midst of events and problems and ‎defends it. Naturally, people are also following him in this fight. Since the economic ‎conditions of the country today have become more difficult due to the enemies and due to ‎the economic pressures that have been imposed on the people, it’s imperative that the ‎authorities stand in front of the various groups of people in order to face the hardships and ‎accept economic problems.”‎
‎ ‎
His Eminence emphasized the necessity of observing simple living, the limits of piety and ‎non-attachment to the world among the officials, and said, “If this important aspect is ‎desirable in normal circumstances, it’s more desirable given the present situation of the ‎country. Today, the officials must be partners in economic issues and problems more than ‎others in order to make it easy for others to accept the difficult living conditions.”‎
‎ ‎
Referring to the characteristics of the true followers of Imam Khomeyni, he considered some ‎of these indicators as reliance on God’s power, support for believers and standing against ‎disbelievers, polytheists and hypocrites and emphasized, “The hypocrites of the Islamic ‎Ummah are those who support the Imam but don’t practice their actions.”‎

Hujjat al-Islam Haj-‎Abolqasem-Dolabi argued that the person who claims to follow the ‎Imam’s line, must be a pioneer in the practice of the Imam and added, “Is it possible for ‎anyone to claim to follow the Imam’s line and not stand up against the arrogant powers? Is ‎it possible for anyone to claim to follow Imam Khomeini’s school of thought, but not be a ‎source of tranquility and encouragement for the oppressed or humiliate them with their ‎behaviour?”‎