al-Quds Day ‘the day of protecting and defending the oppressed’‎ 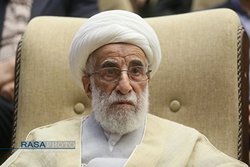 Rasa – The chairman of the Assembly of Experts said that International al-Quds Day ‎is the ‎day of protecting and defending the oppressed and ‎announcing disgust and hostility to the ‎oppressors.‎

The Iranian cleric and politician added that commemorating ‎and attending rallies on ‎International al-Quds Day will lead to the disappearance of the usurping state of Israel, God-‎willing and added, “The people must know that the International al-Quds Day ‎isn’t only ‎related the internal issues of Iran but rather it’s an international day and is related to the all ‎the weak and oppressed people of the world.”‎
‎ ‎
Emphasizing that we must support the oppressed and stand up against the oppressors, ‎Ayatollah Jannati said, “The United States is the most oppressive power in the world today ‎and the Zionist regime the House of Saud are the oppressors of today and they must be ‎confronted.”‎
‎ ‎
Referring to a narration from the Commander of the Faithful, Imam Ali, he said, “The ‎Muslims must be the enemies of the oppressors and protect the oppressed. International al-‎Quds Day ‎is the day of protecting and defending the oppressed and announcing disgust and ‎hostility to the oppressors. Every step that the people take in these marches is worship on ‎the path of God.”‎
‎ ‎
Ayatollah Jannati ‎said that the United States has increasingly expressed its animosity against ‎the Islamic ummah, especially Iran and said, “We must to increase our perseverance and ‎confrontation against the United States and the more we stand against the United States and ‎fight them, the more God will be satisfied with us. The Quran says that any action which ‎angers the enemies is a righteous act and surely the marches of International al-Quds Day ‎‎are a righteous deed.”‎

International al-Quds is an annual event held on the last Friday of the holy month of ‎‎‎Ramadhan that was initiated by the Islamic Republic of Iran in 1979 to express support for ‎‎‎the Palestinians and oppose Zionism and Israel.‎

Tags: Jannati al-Quds Israel Jerusalem
Short Link rasanews.ir/201roD
Share
0
Please type in your comments in English.
The comments that contain insults or libel to individuals, ethnicities, or contradictions with the laws of the country and religious teachings will not be disclosed