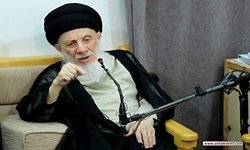 Rasa – Referring to the crimes of Saddam’s Ba’ath regime, one of the sources of emulation ‎‎in Najaf said that the Islamic Seminary of Najaf suffered greatly during the rule of the Ba’ath ‎Party.‎

RNA – A group of seminarians met with Grand Ayatollah Sayyid Muhammad-Sa’id al-Hakim, ‎one of the renowned sources of emulation in the Iraqi holy city of Najaf, on the occasion of ‎the martyrdom of the Commander of the Faithful, Imam Ali.‎

In this meeting, Ayatollah al-Hakim spoke about the life of Imam Ali and the problems ‎facing the Shi’ahs and emphasized the necessity of adhering to the principles and teachings ‎of the Holy Quran and Prophet Muhammad.‎

His Eminence referred to Hadith al-Thaqalayn, the “Narration of the Two Weighty Things,” ‎which is a narration from the Prophet Muhammad which describes the Quran and the Ahl al-‎Bayt [the Family of the Prophet] as two weighty things, and said, “Although the Shi’ahs were ‎subjected to great pressure and oppression, this narration proves their truthfulness. Some of ‎the enemies of the Shi’ah thought they could destroy the true Islam which relied on the ‎guardianship of the Ahl al-Bayt, but sincere people in this school of thought didn’t allow the ‎enemies to achieve their evil goals.‎
‎ ‎
Ayatollah al-Hakim continued, “The Shi’ahs have undergone various periods, such as during ‎the rule of the Ba’ath Party. The Ba’athist regime in Iraq forced foreign and non-Iraqi ‎scholars and seminarians and scholars to emigrate from the country and then engaged in ‎executing Iraqi scholars and seminarians and the situation of the country was changed such ‎that the city of Najaf was almost empty of scholars and seminarians and the Islamic ‎Seminary was damaged during this period. Then the events of the 1990s occurred, and now, ‎with the overthrow of the Ba’athist regime, all praise be to God, the Islamic Seminary has ‎been able to resume its scientific and promotional activities.”‎
‎ ‎
He invited the seminarians to practice their duties and prayed to God Almighty to grant grace ‎to the seminarians so that they can gain sincerity in performing their duties.‎