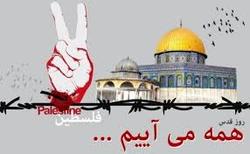 Rasa – More than 300 Sunni scholars and academics have invited the Islamic ummah to ‎proclaim their solidarity with the oppressed Palestinian people and ‎defend al-Quds ‎‎(Jerusalem) by participating in the marches held on International al-Quds Day.‎

RNA – According to the Secretariat of the Council for the Planning of the Theological Schools ‎of the Ahlul-Sunnah, 337 Iranian Sunni scholars and academics have issued a statement in ‎which they invited the Islamic ummah to proclaim their solidarity with the oppressed ‎Palestinian ‎people and ‎defend al-Quds (Jerusalem) by participating in the marches held on ‎International ‎al-Quds Day.‎

International al-Quds is an annual event held on the last Friday of the holy month of ‎‎‎Ramadhan that was initiated by the Islamic Republic of Iran in 1979 to express support for ‎‎‎the Palestinians and oppose Zionism and Israel.‎

The text of the joint statement of the Iranian Sunni scholars is as follows:‎

The holy month of Ramadhan is an exercise in patience and endurance, in the light of which ‎the gift of divine victory is promised to the faith community. The Holy Quran also introduces ‎the victory of a society as a product of stability, resistance and fearlessness in the face of ‎the enemies because the divine tradition is the raising of the flag of faith and truth and the ‎leadership of those on the axis of truth are patient and God-seeking warriors. In this way, ‎the sleeping souls are awakened and the tired ones become patient until the liberating ‎movement of the Muslims accelerates and Islamic resurrection sweeps across the world.‎
‎ ‎
Now that the discourse of the Islamic Awakening, as a sweet fruit of revolutionary Islam in ‎the thought of Imam Khomeyni and the Supreme Leader of the Islamic Revolution ‎‎[Ayatollah Khamenei], has given important challenges to the capitalist and materialist world ‎and has created an ocean of sacrifice and sincerity in the life of human society and ‎accompanies the hearts of the freedom-seekers until they reach the shore of salvation, the ‎sworn enemies of Islam and Muslims have turned toward slandering authentic Islam. With ‎the support of the traitors to Islam and Muslims, they have sunk their claws in the face of ‎genuine Islam and through their foolish and reactionary actions, the atmosphere of Islamic ‎communities has been polluted.‎

This year, the Islamic Ummah and the freedom-seeking people of the world welcome ‎International al-Quds Day given the situation in which the claws of the occupying Zionist ‎executors are still stained with the blood of innocent victims and the criminal United States ‎has compounded these crimes by engaging in the conspiracy of transferring its embassy to ‎Noble al-Quds and the disgraceful “Deal of the Century” has been implemented with the help ‎of the Muslims.‎
‎ ‎
Sunni scholars and academics in the Islamic Republic, while adhering to the ideals of the late ‎founder of the Islamic Republic [Imam Khomeyni] and the wise guidance of the Supreme ‎Leader of the Islamic Revolution [Ayatollah Khamenei], condemn the crimes of the ‎occupiers, as well as the treacherous “Deal of the Century,” and call on all the free Ummah ‎and the honourable Islamic sacred system to declare solidarity with the oppressed ‎Palestinian people and defend Noble al-Quds by participating in the marches on International ‎al-Quds Day.‎

Tags: Sunni Palestine Iran Jerusalem al-Quds al-Quds Day
Short Link rasanews.ir/201rnl
Share
0
Please type in your comments in English.
The comments that contain insults or libel to individuals, ethnicities, or contradictions with the laws of the country and religious teachings will not be disclosed