‎‘2030 Agenda for Sustainable Development’ is a colonial document ‎ 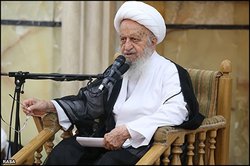 Rasa – The revered source of emulation ‎ ‎described the “2030 Agenda for Sustainable ‎Development” as a ‎colonial document and said, “Through this manner, they want to ‎dominate over us.”‎

RNA – Speaking in the mosque of the Imam Musa al-Kadhim Seminary on the 21st night of ‎Ramadhan, Grand Ayatollah Naser Makarem-Shirazi offered his condolences on the ‎martyrdom anniversary of Imam Ali and said that the Laylat al-Qadr (the Night of Power) is ‎considered as one of the nights in which the destiny of mankind is determined. ‎

In other remarks, he said that mankind takes the first step in his destiny and added, “For ‎example, in the affairs related to the country, if we put aside factional issues and a robust ‎and powerful economic team is selected and comes to the fore, the situation will change.”‎
‎ ‎
Ayatollah Makarem-Shirazi described Laylat al-Qadr as a night of repentance to God Almighty ‎and said, “On this blessed night, we must pledge to God to perform good deeds and avoid ‎immoral actions. If we have such a goal, we will surely achieve a great result on this night.”‎

The prominent teacher in the Islamic Seminary of Qom said that the most important ‎commandments of Imam Ali during the last moments of his noble life were to be God-wary, ‎to have order in ones affairs, to assist the orphans, to create reconciliation between people, ‎to assist the oppressed and to be hostile against the tyrants.‎
‎ ‎
He considered drowning in materialism to be the cause of the oblivion of many good ‎traditions and said, “The result of the material life that has come to us from the West is that ‎one doesn’t have any awareness of his neighbour.”‎
‎ ‎
Ayatollah Makarem-Shirazi ‎described the “2030 Agenda for Sustainable Development” as a ‎colonial document and said, “Through this manner, they want to dominate over us. Shouldn’t ‎we engage in [the command of] ‘forbidding the wrong’ with them? Shouldn’t we engage in ‎‎‘forbidding the wrong’ in response to the uncontrolled inflation imposed upon the people by ‎some merchants and businessmen?”‎

He stressed, “Forbidding the wrong isn’t recapitulated in these cases alone. If there is ‎something immoral on any IRIB program, then the people must engage in forbidding the ‎wrong in a variety of ways, including telephone calls, and it certainly has an impact.”‎
‎ ‎
He added, “Given the immoral situation of cyberspace and environment, if we ignore our ‎youth and children, the enemies will take everything from us.”‎

Ayatollah Makarem-Shirazi ‎emphasized the revival of these two important duties in society ‎and stated, “If we forgo ‘enjoining the good and forbidding the wrong,’ prayers won’t be ‎accepted.”‎