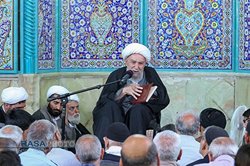 Rasa – Referring to the greatness of Lady Khadijah’s character, the teacher of mysticism and ‎ethics‎ in the Islamic Seminary said, “She was the first to believe in the guardianship of Imam ‎Ali and the angel of revelation always conveyed the greetings of God to her.”‎

RNA – Speaking at Kamarzarin Mosque in Esfahan, Ayatollah Mohammad Naseri, a teacher ‎of mysticism and ethics in the Islamic Seminary, said that Lady Khadijah bint Khuwaylid has ‎done much for the Shi’ahs and said, “The first complete woman and the first person who ‎believed in Imam Ali and his guardianship was Khadijah and she always sacrificed for this ‎guardianship. In Sahih al-Bukhari, it has been narrated that the Angel Gabriel revealed to the ‎Prophet Muhammad, while he was busy farming outside of Madinah, that ‘Khadijah will bring ‎food to you and conveys the greetings of God to her. Whenever, I want to send you a ‎revelation, God conveys His greetings ‎to Khadijah and I also convey my greetings to her. ‎

He further noted that the Khadijah had a very high position and there are detailed narrations ‎about her position and value. Her father was Khuwaylid, her mother was Fatimah and her ‎teknonym was Umm Hind. In regard to her virtues, Sunni scholars have also pointed to ‎various verses of the Quran and several narrations have been mentioned in this regard.”‎
‎ ‎
Ayatollah Naseri continued, “Before Khadijah became a Muslim, she was famous for her ‎wealth, power, greatness and rationality and had the nickname ‘Malakah’ meaning ‘Queen.’ ‎Mubarakah, Tahirah, Aqilah, Kamilah, Zahidah and Mujahidah were among her nicknames. ‎After his death, the Prophet always remembered Khadijah. One day Aishah spoke to the ‎Prophet of God, ‘Why do you always remember Khadijah in the house, while God has given ‎you someone better than her?’ the Prophet replied, “Because Khadijah was the first person ‎among the women who believed in me and the first person who gave her property to the ‎orphans was Khadijah.”‎
‎ ‎
He stated that Prophet Muhammad had a great love for Khadijah and she was always with ‎the Prophet. Many of Khadijah’s sacrifices have been recorded on the path of Islam but she ‎never had an obligation to Islam, the Muslims and the Prophet.”‎
‎ ‎
Ayatollah Naseri said, “At the end of her life, Khadijah said to Fatimah al-Zahra said, ‘I ‎sacrificed all my life and property in the cause of Islam and I couldn’t afford to prepare a ‎shroud for myself. If it’s possible, take a cloak from the Prophet of God for me as I’m afraid ‎of the punishment of grave and the Hereafter. Fatimah al-Zahra mentioned this to the ‎Prophet and he gave his own cloak ‎but the angel of revelation, Gabriel, descended upon the ‎Prophet and said: ‘God has said that Khadijah has given everything that she has in the path ‎of God. Now her shroud is with us and we give her a heavenly shroud.’”‎

Tags: Naseri Khadijah Islam Muhammad
Short Link rasanews.ir/201rkW
Share
0
Please type in your comments in English.
The comments that contain insults or libel to individuals, ethnicities, or contradictions with the laws of the country and religious teachings will not be disclosed