What sanctions did the JPCOA remove?‎ 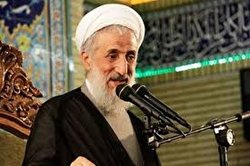 Rasa – The temporary Friday prayer leader of Tehran ‎described the countries economic ‎problems as a result of trusting the enemies and told the officials: “What sanctions did the ‎JCPOA remove which you want to select again?”‎

RNA – Speaking on a lecture during the holy month of Ramadhan at Tehran’s Shahid Beheshti ‎Mosque, Ayatollah Kazem Seddiqi said, “Man must not be negligent of himself. The ultimate ‎act of neglect of misguidance.”‎

The temporary Friday prayer leader of Tehran emphasized that all humans avoid oppression, ‎betrayal and deception in an intrinsic and rational manner and said, “God promised to man ‎both a promise of sustenance and a promise of knowledge. Therefore, if man has the fear ‎of God and does righteous deeds, God will grant him sustenance ‎and insight.”‎
‎ ‎
Ayatollah Seddiqi added, “The insightful man recognizes the enemies in a timely manner and ‎distinguishes sedition and knows that he must not take the promises of the enemies ‎seriously because he knows that the promises of the enemies are lies.”‎

He continued, “In regard to the Joint Comprehensive Plan of Action [JCPOA], whatever the ‎enemies wanted, the negotiators did so beforehand, and they were very hasty to gain their ‎confidence. Now, it must be asked of these same negotiators ‘did this trust change the ‎enemies’ confidence in you or were they afraid of you?’ The same action taken by the ‎authorities in regard to the issue of the JCPOA didn’t allow the enemies to fulfill their ‎promises but Iran’s negotiating team did whatever they wanted before the deadline.”‎

He said that during the negotiations, the officials and the negotiating team promised the ‎people that the sanctions would be lifted from the day the agreement was signed and noted, ‎‎“Today, one must ask these same officials which one of the sanctions was lifted? These high ‎costs, economic problems, the lack of price controls, unemployment and production cuts ‎are all the result of trusting in the enemies.”‎
‎ ‎
Ayatollah Seddiqi added, “If you didn’t stretch out your hands to the enemies with the fear of ‎God, you would didn’t be facing an economic, political and social stalemate today.”‎

Tags: Seddiqi JCPOA Iran Sanctions
Short Link rasanews.ir/201rju
Share
0
Please type in your comments in English.
The comments that contain insults or libel to individuals, ethnicities, or contradictions with the laws of the country and religious teachings will not be disclosed