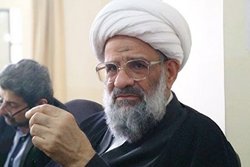 Rasa – Referring to the warnings of the Supreme Leader about the economic warfare, Hujjat ‎al-Islam Ali Malakouti‎ criticized the officials’ lack of attention to the issue and the lack of ‎planning on the basis of war conditions.‎

RNA – In an exclusive interview with Rasa News Agency, Hujjat al-Islam Ali Malakouti, the ‎representative of the people of East Azerbaijan province in the Assembly of Experts, said ‎that the country is vulnerable to the economic situation and said, “For several years, the ‎Supreme Leader of the Islamic Revolution [Ayatollah Khamenei] has been mentioning the ‎economic issues with different titles to the people and officials to help the people of the ‎society, especially government officials, to escape the economic problems in the country.”‎
‎ ‎
The cleric and politician stated that the Supreme Leader has repeatedly warned about the ‎issue of “economic warfare” and noted, “Unfortunately, some officials aren’t paying enough ‎attention to this very important issue and the actions taken with the conditions of economic ‎warfare aren’t perceived by them.”‎
‎ ‎
Referring to the fact that the slogans chosen by the Supreme Leader as the slogans of the ‎year are fully compatible with the situation of the country and the world, said, “By observing ‎the enemies’ movements, the Supreme Leader always tries to keep the country safe from ‎an attack by the enemies by providing effective guidelines.”‎
‎ ‎
Ayatollah Malakouti pointed to the emphasis of the Supreme Leader in the fight against the ‎smuggling of goods and said, “Today, the officials must put forward a strategy in line with ‎the guidelines of the Supreme Leader and adopt modern laws because otherwise the ‎problems of society won’t be resolved.”‎

His Eminence criticized some officials for not paying attention to the slogans of the year and ‎added, “Today, the officials must know that the placement of placards containing the ‎slogans of the year in administrative offices won’t solve the economic problems facing ‎society. Officials must take appropriate scientific measures in regard to the slogan of ‎‎‘Boosting Production.’”‎
‎ ‎
He described the effects of the boost in production on the growth of the country’s economy ‎and added, “The boost in production will reduce the statistics of unemployed people and ‎dependence on foreign countries and unbridled inflation will be ended.”‎
‎ ‎
Stressing that the boost in production ‎will also save the country from dependence on oil, ‎Ayatollah Malakouti said, “Manufacturers must boost domestic production by improving the ‎quality of Iranian products so that people won’t want to buy foreign goods.”‎

Tags: Malakouti Economy Iran
Short Link rasanews.ir/201rjt
Share
0
Please type in your comments in English.
The comments that contain insults or libel to individuals, ethnicities, or contradictions with the laws of the country and religious teachings will not be disclosed