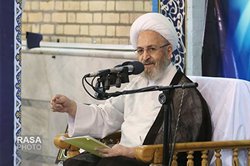 Rasa – The revered source of emulation ‎said that the issue of the hypocrites must not be ‎taken lightly and add, “In the Islamic Republic, we have seen the dangers of the hypocrites ‎that we haven’t seen ‎from the disbelievers and foreign enemies.‎”‎

Stating that some exegists of the Quran ‎have said that about two thousand verses of the ‎Quran about the hypocrites have been revealed, Ayatollah Sobhani noted, “In the Islamic ‎Republic, we have seen the dangers of the hypocrites that we haven’t seen from the ‎disbelievers and foreign enemies. The issue of the hypocrites must not be taken lightly.” ‎

The teacher in the Islamic Seminary of Qom stated that believing in God and on the Day of ‎Resurrection makes mankind lovers in the cause of God and said, “The true believers go to ‎the frontlines of jihad without any excuses but the hypocrites always seek excuses and they ‎refuse to go to the frontlines of jihad.”‎
‎ ‎
Referring to the fact that the hypocrites are always trying to stage the scenes, he said, “That ‎the hypocrites were near at the Prophet Muhammad during the Battle of Tabuk and received ‎permission to stay in Madinah for false pretenses because there is no need for any kind of ‎istikharah [prayer in which one asks God for guidance] in good work and the believer doesn’t ‎hesitate to engage in jihad on the way of God. Moreover, if you intend to go to war, you ‎seek the preparation of equipment and personnel as much as possible before obtaining ‎permission.”‎

Ayatollah Sobhani continued, “If the hypocrites went to the Battle of Tabuk, they would ‎have weakened the will of the Muslims which would have led to the defeat of the Islamic ‎army. Some Muslim people were impulsive and influenced by the words of the hypocrites. ‎For this reason, the Prophet granted them permission to stay in Madinah.”‎

Tags: Sobhani Iran Hypocrite Disbeliever
Short Link rasanews.ir/201rjA
Share
0
Please type in your comments in English.
The comments that contain insults or libel to individuals, ethnicities, or contradictions with the laws of the country and religious teachings will not be disclosed