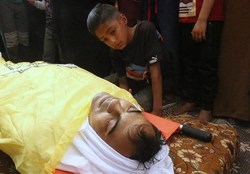 The international community should stop fueling human rights violations in besieged Gaza and occupied Palestine, and that could happen only through ending institutional impunity for Israel.

RNA - It is in line with this policy that Israel deliberately continues to provoke Gazans with military operations and covert terrorist actions. It also provokes Palestinians by continued desecration of the Al-Aqsa Mosque, as well as raids, arrests and attacks against their property - including targeting Gaza protesters.

As international human rights groups hold, the current situation cannot be explained, addressed or remedied without a clear-eyed look at its root causes, which remain Israel's violations of international law and brutal control of the Occupied West Bank and Gaza Strip.

The international civil society should withdraw support from the bloodshed by halting military aid, political backing and institutionalized impunity for Israel. The root cause for all this and more is this: Israel’s continued violations of international law, including its brutal and illegal military occupation of the occupied Palestinian territories that has lasted decades and its racist policies against Palestinian citizens of the Holy Land.

According to Fars News Agancy, lest there be any doubt, Palestinians have taken to the Gaza border to tell the world that they are not longer willing to remain accustomed to Israel's continued blockade, confiscation of their land and the displacement of its inhabitants; the demolition of their homes; the aggressive expansion of settler colonies; settler violence against Palestinians and their property facilitated by the regime; torture and ill-treatment; and increasing numbers of arbitrary arrests and administrative detentions.

To fight back, the criminal occupation is intensifying, with Israeli forces sealing off Palestinian neighbourhoods; imposing more severe sentencing guidelines for not just stone-throwing people but also those accused of stone-throwing; and using excessive force — including live fire — against peaceful crowds of protesters. Unsurprisingly, Prime Minister Benjamin Netanyahu continues to incite further violence by falsely claiming that his forces are fighting terrorists.

The Palestinian civil society is now calling on the international community to take steps to halt this systemic violence and apartheid. This needs to be heeded in the United States too. It is American weapons and diplomatic support at the UN that enable Israel to carry out its illegal policies of blockade, extrajudicial assassination, collective punishment and colonization of Palestinian land. Simply put, the usurper regime is the darling of the War Party in Washington.

Sadly enough, the United Nations has agreed to conspire in this. It is not doing anything about it, despite the fact that it violates international law and Palestinians’ rights. It is past time for the international community to assume its responsibilities. They must insist on the inviolability and universality of human rights, and call for an immediate change in Western-American policy toward Palestine. They must also call on the UN to demand an immediate stop to the Judaization of Palestine and an unconditional lifting of the Gaza Blockade.