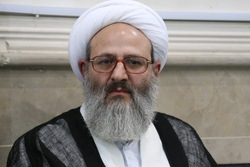 Rasa – The member of the Society of Seminary Teachers of Qom said that man must not ‎make excuses on the path of worship and said, “We must not consider the problems caused ‎by our inaccurate performance to Islam and the ‎Islamic Revolution.”‎ ‎

RNA – Speaking at the second session of a series of discussions on Quranic commentary ‎that held at Qom’s Salmasi Mosque, Ayatollah Mohsen Faqihi, a member of the Society of ‎Seminary Teachers of Qom, referred to verse 68 of the chapter “al-Baqarah” [The Cow] and ‎discussed the excuses of the Children of Israel, saying, “From the beginning, the Children of ‎Israel ‎made excuses. Today, we also see that these people are a nefarious people.”‎
‎ ‎
Referring to the story of the Children of Israel’s golden calf and said, “Today, we see that ‎some people who commit a crime, with various statements and advertisements, consider ‎themselves outside the assembly of criminals. For example, a person who steals always ‎objects to charges of embezzlement and robbery.”‎

He noted, “We must know that the root of many of the dangers and crimes that occur in ‎society come back to ourselves. Therefore, today we must not put the criterion of ‎truthfulness in the language of the people because the language of the people doesn’t ‎express the truth.”‎
‎ ‎
Noting that speaking must be accompanied by action, Ayatollah Faqihi‎ emphasized, “Today, ‎we must not accept words easily but we must put words together with actions and by ‎measuring them both together, we have the right to speak. In the societies of today many ‎words have been spoken but what is less noticeable is action.”‎

His Eminence stated that the Quranic recommendations were made for a person to learn ‎lessons and added, “We must study the Quranic stories and work on them with lessons so ‎we won’t suffer from moral deviations and so that we’ll be on the path to servitude.”‎

Referring to the fact that man has to act on the command of the God and not make excuses ‎on the path of servitude, he said, “When a person realizes his duties of servitude, he must ‎not preach, but without delay, must perform his duty of worship.” ‎

Ayatollah Faqihi said that the believer must speak and act in accordance with each other and ‎added, “Today, everyone must be mindful of the weak and the disadvantaged with their ‎actions.”‎

Tags: Faqihi Israel Islam Revolution
Short Link rasanews.ir/201riL
Share
0
Please type in your comments in English.
The comments that contain insults or libel to individuals, ethnicities, or contradictions with the laws of the country and religious teachings will not be disclosed