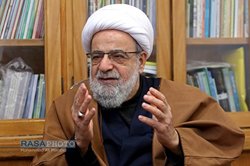 Rasa – The member of the Society of Seminary Teachers of Qom ‎said, “These criminals are ‎very deceitful and don’t want to accept their ‎defeat in Yemen and empty their anger against ‎the oppressed Shi’ahs. Through such crimes, ‎the House of Saud seeks to compensate for ‎their successive defeats in the countries of the ‎region.”‎

RNA – In an exclusive interview with Rasa News Agency, Ayatollah Najmeddin Tabasi ‎condemned Saudi Arabia’s brutal action against Saudi Shi’ahs, saying, “These sorts of crimes ‎are nothing new from the medieval regime of the House of Saud. They saber-rattle about ‎evolving and civilization but they are barbarians who are always engaged in killing.”‎
‎ ‎
The member of the Society of Seminary Teachers of Qom said,‎ “One of the clerics who was ‎one of the martyrs said, ‘I have been studying from elementary school to university in Hejaz ‎and when I was in grade nine, it was officially written in our history textbook that the ‎ancestors of the Saudis were Jews.’ The House of Saud is always proud that they are ‎descendants of the Jews of Khaybar. Therefore, the animosity of these criminals toward ‎Muslims and Shi’ahs isn’t hidden by anyone.”‎
‎ ‎
Ayatollah Tabasi stated that House of Saud is a companion to the enemies of Islam and ‎added, “The House of Saud was friendly to the enemies of Islam and played the role of a ‎steamroller for them. These criminals always obeyed the Great Satan and the Zionist regime ‎and by committing terrible crimes, massacres and executing Shi’ahs is considered a good ‎service for them.”‎
‎ ‎
Referring to the oppression of Shi’ahs in Saudi Arabia, he said, “One of the martyrs of the ‎horrific Saudi crime, who was filmed a few days before his martyrdom, said ‘we want the ‎Saudi government to deal with this unfortunate state.’ He objected to the ignorance of the ‎oppression of the Saudi regime against the Shi’ahs ‎and said ‘we constitute 25% of the Saudi ‎population, why don’t you give us the basic facilities of life?’ The ruthless Saudi rulers ‎responded to his objection with a brutal action which is far from Islamic law and human ‎rights.”‎

His Eminence stated that the Saudis are responding to the protests with bullets, torture, ‎imprisonment and execution, said, “When someone objects to the oppressive Saudi ‎government, they are first imprisoned, flogged and then their hands and feet are cut as ‎corruptors and finally, their heads are separated from their bodies and their bodies are hung ‎on utility poles. Today, we have no doubt that the House of Saud is a belligerent and a ‎corruptor on earth and due to their animosity against Shi’ahs and against all Muslims, they ‎lynched them.” ‎

Referring to the scandalous defeat of the House of Saud against the Muslims of Yemen, ‎Ayatollah Tabasi ‎said, “These criminals are very deceitful and don’t want to accept their ‎defeat in Yemen and empty their anger against the oppressed Shi’ahs. Through such crimes, ‎the House of Saud seeks to compensate for their successive defeats in the countries of the ‎region.”‎
‎ ‎
He added that the oppressed Shi’ahs of Saudi Arabia are deprived from the basics of life. ‎They don’t have the right to enter the upper ranks of the army and even in schools, Shi’ah ‎teachers are prevented from teaching history and theology but they are taught by all ‎Wahhabi professors. There are over 150,000 Shi’ahs in Madinah but no mosque or ‎husayniyah has been built for these dear ones. Islamic seminaries in Hejaz are located in ‎some houses, gardens and reception halls and none of them has official permission.”‎