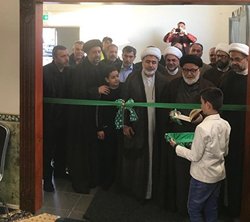 Rasa – The Representative of Ayatollah al-Sistani inaugurated the Imam Hasan Mosque and ‎Husayniyah in Sweden.‎

RNA – Hujjat al-Islam Sayyid Murtadha al-Kashmiri, the representative of Grand Ayatollah ‎Sayyid Ali al-Sistani ‎in Europe, ‎inaugurated the Imam Hasan Mosque and Husayniyah in ‎Sweden in the presence of Muslims in this country and some European countries.‎

Speaking at the opening ceremony of the mosque and husayniyah, the prominent Shi’ah cleric ‎‎ said, “Ayatollah al-Sistani has paid special attention to such centres because they publish ‎Muhammadi culture in these countries.”‎
‎ ‎
Arguing that the administrators of the centres must pay particular attention to the youth, ‎Hujjat al-Islam al-Kashmiri‎ argued, “The supreme authority in Najaf gives special emphasis ‎on providing the youth with the ideas of the Family of Muhammad, the beliefs and ‎intellectual and moral position of the Infallible Imams.”‎

He continued, “Parents must encourage their children to attend weekend Islamic schools and ‎act on their religious responsibilities.”‎

Tags: Sweden Mosque Sistani Kashmiri
Short Link rasanews.ir/201rhj
Share
0
Please type in your comments in English.
The comments that contain insults or libel to individuals, ethnicities, or contradictions with the laws of the country and religious teachings will not be disclosed