The Quranic lifestyle is a barrier against the enemies’ cultural influence ‎ 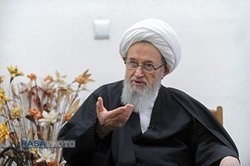 Rasa – Ayatollah Tabarsi ‎said, “Unfortunately, today we are witnessing the spread of ‎Western culture in the Islamic society, which is a great danger to the religious and Quranic ‎lifestyle.”‎

RNA – Speaking at the closing ceremony of the National Festival of Quranic Products in Sari, ‎Ayatollah ‎Nourollah Tabarsi said that the Islamic Revolution has become the bedrock of ‎Quranic grow and development in society and added, “Today, thanks to the Islamic ‎Revolution, we see the development of Quranic culture at various levels of society.”‎

The representative of the Supreme Leader of the Islamic ‎‎Revolution in ‎Mazandaran‎ province ‎emphasized that Quranic culture is the best way to confront attacks and social damages in ‎society and said, “Distance from the Quranic concepts will lead to infiltration and conspiracies ‎by the enemies in the country.”‎

He said that the holy month of Ramadhan is a valuable opportunity for the development and ‎expansion of Quranic programs and noted, “The month of Ramadhan is the month of the ‎spring of the Quran and Quranic meetings and programs should be given greater attention ‎during this month.”‎
‎ ‎
Ayatollah ‎Tabarsi‎ emphasized the use of Quranic concepts, along with reading and reciting ‎the Quran and said, “Quranic concepts are a codified law for guidance, transcendence and ‎the redemption of mankind.”‎
‎ ‎
The Friday prayer leader of Sari stressed the most important problem is the isolation of ‎Islamic society from Quranic concepts and said, “Unfortunately, Islamic societies have ‎distanced themselves from Quranic culture and values, which has caused many crises and ‎problems for the Islamic ummah.”‎

He said that the divine word has defined the course of growth and excellence of humanity ‎and noted, “Unfortunately, today, humanity has been moving away from that specific ‎framework, which has caused some problems.”‎
‎ ‎
Ayatollah ‎Tabarsi described the Islamic Revolution as a divine and Quranic revolution and ‎stated, “Thankfully, due to the blessings of this Revolution, religious and divine values grew ‎and expanded in society. There is a little way to go until we reach the desired conditions and ‎we must achieve these by acting in accordance with the Quran and divine concepts.”‎
‎ ‎
His Eminence said that the enemies are trying to diminish Quranic concepts and values in ‎Islamic society adding, “As long as the Quranic concepts are dominant in the country, the ‎enemies will never achieve their goals and plans.”‎

Tags: Tabarsi Quran Culture Iran
Short Link rasanews.ir/201rfG
Share
0
Please type in your comments in English.
The comments that contain insults or libel to individuals, ethnicities, or contradictions with the laws of the country and religious teachings will not be disclosed