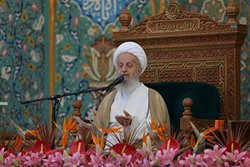 Rasa – At the beginning of the Iranian new year, the source of emulation emphasized the ‎necessity of avoiding formalities and luxury and said, “We must be resistant against the ‎problems because the people are brave, resistant, enduring ‎and lasting‎‏.‏‎”‎

RNA – Speaking at the Holy Shrine of Lady Fatimah al-Ma’sumah in Qom, Grand Ayatollah ‎Naser Makarem-Shirazi offered his congratulations to the honourable people of Iran on the ‎beginning of the year of 1398 and expressed hope that this year will be a year of success ‎and blessings for the noble nation of Iran.‎
‎ ‎
The revered source of emulation also considered the coinciding of the Iranian new year with ‎the birth anniversary of Imam Ali as a good omen and expressed his advice to the ‎authorities and the people, saying, “We hope that the officials will work harder to solve the ‎problems in the new year. The people must be more sincere and not think of themselves ‎alone.”‎

He said that hoarding and embezzlement was a sign of weakening the foundations of faith ‎and stated, “If we consider God has present and observing our actions and we believe in this ‎important topic, we won’t do whatever it takes and our circumstances will be different.”‎

Ayatollah Makarem-Shirazi stated that perseverance and patience against problems is one of ‎the Quranic principles and one of the keys of happiness and human success and said, “We ‎must resist the problems, especially the problems of the world today, where the global ‎bullies seek to impose their domination on others.”‎
‎ ‎
His Eminence said, “The enemies want to return to the Middle East, but this is a delusion. ‎The enemies, because of the anger over these failures, are trying to hinder and create ‎problems and we must be resistant against the problems because the people are brave, ‎resistant, enduring and lasting.”‎
‎ ‎
He noted, “Let’s start the new year with this Quranic instruction, end formalities and assist ‎the needy and deprived families. Foreign travels must be reduced – we must not spend the ‎country’s money abroad. We have sufficient entertainment centres and there are places for ‎pilgrimage and tourism in the country.”‎

In conclusion, Ayatollah Makarem-Shirazi ‎described and interpreted the special supplication ‎for the new year: “Oh reformer of hearts and minds, Oh director of day and night, Oh ‎transformer of conditions, change our conditions to the best in accordance with your will!” ‎and prayed for the success and honour of the Islamic system and the people of Iran, ‎especially the youth, and for the resolving of the problems of society.