We don’t need foreigners to reform our economic affairs 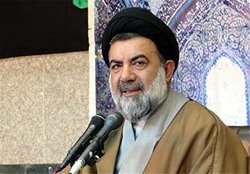 Rasa – Hujjat al-Islam Mir-Emadi said, “We don’t need foreigners to reform our economic ‎affairs and we can see the methods of ‎resolving the economic problems of society in the ‎lifestyle of Imam Ali‎.”‎

RNA – Speaking at the “Tenth Annual Conference on the Lifestyle of Imam Ali” in ‎Khorramabad, Hujjat al-Islam Sayyed Ahmad Mir-Emadi, the representative of the Supreme ‎Leader of the Islamic Revolution in Lorestan province, and said, “The focus of this year’s ‎conference was economy and society.”‎

Stating that as much as one speaks about Imam Ali is little, the Friday prayer leader of ‎Khorramabad said, “Imam Ali is an ocean of virtues. He had a policy of justice and honesty ‎in his government and he reached a level of munificence, generosity, forgiveness, sacrifice ‎and charity in piety and chapters of the Quran were revealed in his honour.”‎
‎ ‎
He emphasized that we must learn from the sermons of Imam Ali and added, “In Nahj al-‎Balaghah, 241 sermons, 79 letters and 480 utterances, 11,000 hadiths (narrations) and 182 ‎du’as (supplications) have been compiled.”‎
‎ ‎
Referring to the greatness of the character of Imam Ali, Hujjat al-Islam Mir-Emadi‎ said, “We ‎have a role model and exemplary personality such as Imam Ali and students of economics ‎consider him as an economic ideal for the livelihoods of the people.”‎

His Eminence stated, “We don’t need foreigners to reform our economic affairs and we can ‎see the methods of resolving the economic problems of society in the lifestyle of Imam Ali.”‎
‎ ‎
‎“We have role models and following them leads to happiness to this world and in the ‎hereafter and we have role models which are building civilizations and are eliminators of ‎economic problems,” he noted.‎

Hujjat al-Islam Mir-Emadi said that even though Imam Ali was involved in many wars, he ‎wasn’t negligent of the economy and the situation of the livelihoods of the people and ‎noted, “The economy that Imam Ali sought was economic independence.”‎

Tags: Miremadi Lorestan Imam Ali Economy Iran
Short Link rasanews.ir/201rPo
Share
0
Please type in your comments in English.
The comments that contain insults or libel to individuals, ethnicities, or contradictions with the laws of the country and religious teachings will not be disclosed