Officials must not be wanders in our state institutions and departments ‎ 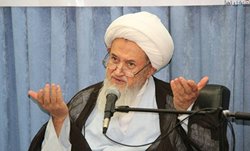 ‎RNA – Speaking during a meeting with a group of officials from Mazandaran province in Sari, ‎Ayatollah ‎Nourollah Tabarsi, the representative of the Supreme Leader of the Islamic ‎‎Revolution in ‎Mazandaran, said that serving the people is the most important duty of the ‎authorities in the sacred system of the Islamic Republic and said, “The life of responsibility is ‎short and therefore it must be limited to serving the people.”‎

The representative in the Assembly of Experts said that by serving the people, the ‎authorities will have tremendous value in society and added, “The people must not be ‎wanders in our state institutions and departments because of some burdensome laws.”‎
‎ ‎
Emphasizing that today the Iranian people deserve the best, he said, “In the fifth decade of ‎the Islamic Revolution, the officials must act in a manner that doesn’t impose pressure on ‎people in regard to various issues.”‎

Ayatollah ‎Tabarsi stated that over the last forty years, the Islamic Revolution has provided ‎the people of our country with valuable services, added, “The progress we have achieved in ‎various fields today has been achieved in the light of the Islamic Revolution and the system.”‎
‎ ‎
The Friday prayer leader of Sari said that today the enemies are determined to make the ‎people surrender to their demands and added, “Presently, all the enemies’ focus is in the ‎economic sphere and by applying pressures and sanctions, they try to create public ‎discontent in the country.”‎

He emphasized that the enemies must know that this nation will not surrender to their ‎demands and will stand with authority against their hostilities and said, ‘The great nation of ‎Iran doesn’t allow the United States and its allies to achieve their sinister goals regarding ‎Islamic Iran.”‎

Emphasizing that protecting the Revolution today is the most important task of the Islamic ‎society, Ayatollah ‎Tabarsi ‎said, “In the country today, the authorities have a heavier duty ‎than other people.”‎

Tags: Tabarsi Iran Islamic Revolution
Short Link rasanews.ir/201rPU
Share
0
Please type in your comments in English.
The comments that contain insults or libel to individuals, ethnicities, or contradictions with the laws of the country and religious teachings will not be disclosed