A report on the Crisis Management committee of Iran’s Seminary 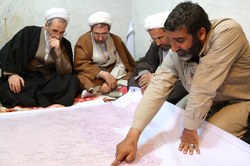 The seminaries no matter brothers or sisters section, have always protected people in unexpected events and Natural disasters.

RNA - The seminaries no matter brothers or sisters section, have always protected people in unexpected events and Natural disasters.

Last year, various regions of the Iran, including areas of Ilam and Kermanshah provinces, suffered an earthquake disaster. So in line with the religious duty and in a response to the call of the Supreme Leader, Ayatollah Khamenei, Committee of the Crisis Management in Seminary has stablished. Since then it has had an active presence in the Central Headquarters of the unexpected incidents and has offered several services in the earthquake-affected areas.

Formation the headquarters of the crisis and unexpected events with the presence of the five large seminary in Qom, adoption of tens of resolutions and pursuit of its implementation, the presence of professors, students and clerics in the earthquake-stricken provinces of Kermanshah, Ilam, Kurdistan, and Hamedan in the early hours of the disaster for relief and rescue, the establishment crisis subcommittees in Kermanshah province and in some other neighbor provinces, performing clergy tasks to solving the people problems and observing the status of schools are among the activities of Iranian Islamic Seminary in earthquake-stricken areas.

The spontaneous presence of more than 1,000 clergies from the seminary of Qom, and formation jihadi organizations from the second day after the earthquake as a group of 320 members in the city of Sallath Babajani (Kermanshah Province) and a group of 400 members in Sarpul-e-Zahab and Qasr-e Shirin (same province), was for helping people to rescue people serving food for them or performing burial for the victims. In addition to these numbers, many pilgrims which by then came from Karbala pilgrimage, joined the clergies to help people.

Among the active groups of the seminaries in this incident were jihadi groups, which activities were services and cultural programs. These groups consisted of 300 members, about 100 members of which were the missionaries in the area of Salthis Baba Jani.

The clergies also performed these services: the direct dispatch of about 150 clergies who had attended in Arbaeen pilgrimage to the earthquake - stricken areas and formation a meeting with the charities and supplying 15 containers, the provision of data-x-items and transferring them to the region.

Tags: Seminary Iran Crisis Management
Short Link rasanews.ir/201rPK
Share
0
Please type in your comments in English.
The comments that contain insults or libel to individuals, ethnicities, or contradictions with the laws of the country and religious teachings will not be disclosed