‎Qom is not a place of moral and unconventional action‎ 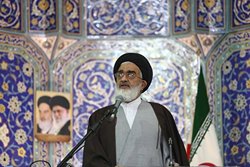 Rasa – Ayatollah Sa’idi‎ said, “The enemies don’t sit quietly in their attempts to destroy Qom ‎and send their own agents of influence and spend money to change the cultural and ‎‎revolutionary image but they must know that Qom is not a place of moral and ‎‎unconventional action.”‎

RNA – In his Friday prayer sermon delivered to a large and fervent crowd of believers in ‎‎‎‎Qom’s Qods Prayer Hall, Ayatollah Sayyed Mohammad Sa’idi‎ said that Islamic society can’t ‎be associated with the traitorous infidels and said, “The Islamic ummah must announce its ‎dissociation from the polytheists such the United States and the Zionists.”‎
‎ ‎
The custodian of the Holy Shrine of Lady Fatimah al-Ma’sumah ‎added that Imam Khomeyni ‎and his successor, Ayatollah Khamenei, considered the Great Satan [the United States] and ‎the Zionist regime as cancerous tumours and added, “Meeting with with the Americans and ‎the Zionists is a violation of God’s command to dissociate from the polytheists and ‎dissociation from the polytheists has become part of the culture of the Islamic Revolution.”‎
‎ ‎
Referring to the glorious presence of the Iranian people on 22 Bahman [11th February], he ‎said, “The epic presence of the people in the celebrations marking the fortieth anniversary of ‎the Islamic Revolution played an important role in increasing the country’s national authority ‎against the mischief of the enemies of the Islamic Revolution.”‎

Ayatollah Sa’idi referred to Supreme Leader’s announcement of the second step of the ‎Islamic Revolution and said, “Given the experience of the Islamic Revolution , the Supreme ‎Leader places particular emphasis on approaches. The first approach is explaining the roots, ‎the nature and truth of the greatest and most popular revolution of the new era which is ‎based on Islam and has been shaped by an emphasis on the will of the people.”‎

The representative of the Supreme Leader of the Islamic Revolution in Qom ‎continued, ‎saying, “The second approach in the word of the Supreme Leader is the forty years of ‎dignity and majesty in Iran and the Iranian people and the Islamic Revolution and the many ‎achievements that have been less addressed by analysts.”‎
‎ ‎
In another part of his speech, he said that Qom is considered as the centre of the Islamic ‎Revolution and continued, “This sacred city has always been subject to the spite of the ‎vengeful enemies and tried to destroy the image of this city. They don’t sit quietly in their ‎attempts to destroy Qom, which is the sanctuary of the Ahl al-Bayt and send their own ‎agents of influence and spend money to change the cultural and revolutionary image but ‎they must know that Qom is not a place of moral and unconventional action.”‎

Ayatollah Sa’idi ‎conveyed his condolences on the death of this striving and simple-living ‎scholar, Ayatollah Mohammad Momeni, and said, “The death of the Ayatollah ‎Momen has ‎made the people of the country, especially the dear people of Qom, mournful. He was born ‎‎81 years ago on a Thursday and passed away on another Thursday. The presence of this ‎hard-working, caring and popular scholar in the Islamic Seminary, the Assembly of Experts ‎and the Guardian Council are some of his valuable services.”‎

Tags: Saidi Momen Friday Friday Prayers Jumuah Qom
Short Link rasanews.ir/201rOQ
Share
0
Please type in your comments in English.
The comments that contain insults or libel to individuals, ethnicities, or contradictions with the laws of the country and religious teachings will not be disclosed