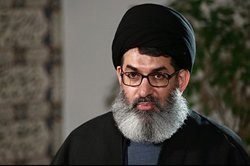 Rasa – Hujjat al-Islam al-Haydari ‎said, “The pillar of the Islamic Resistance Front is the ‎Islamic Republic [of Iran] and there are ‎Muslim and non-Muslims, Arabs and non-Arabs ‎on this front.”‎

Hujjat al-Islam al-Haydari ‎pointed out that the United States and its allies have shown ‎themselves to be in great falsehood and claims to be victorious, while they don’t have ‎domination over anything and they have been defeated and crippled in the region.”‎
‎ ‎
His Eminence added, “There is no middle ground between truth and falsehood and ‎today the conflict between truth and falsehood ‎has risen and the Iranian government ‎has formed the Islamic Resistance Front along with Syria, Lebanon, Iraq, Pakistan, ‎Afghanistan, Yemen and Palestine and no doubt this front is the front of Imam al-‎Husayn.” ‎

He called the victory of the Islamic Resistance Front ‎as a “single goal” and “single ‎leadership” and added, “Today, the entire Islamic Resistance Front ‎is under the ‎leadership of Ayatollah Khamenei. This great leader has led the Muslims for more than ‎thirty years, and when the slogan ‘is there anyone to help me?’ is shouted, thousands ‎of people, rather, millions of the youth of the resistance such as Martyr Mughniyeh and ‎Martyr Mohsen Hojjaji, responded to this invitation and rose to support the orders of ‎the Supreme Leader.”‎
‎ ‎
Hujjat al-Islam al-Haydari ‎stressed, “This wise leader will never retreat. Today is the ‎day of victories and our victory is near and the great victory, meaning the reappearance ‎‎[of Imam al-Mahdi], will soon be realized.”‎

Tags: Haydari Islamic Resistance Lebanon Iraq
Short Link rasanews.ir/201rOP
Share
0
Please type in your comments in English.
The comments that contain insults or libel to individuals, ethnicities, or contradictions with the laws of the country and religious teachings will not be disclosed