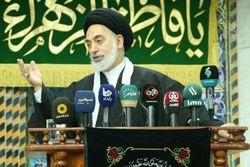 Rasa – Hujjat al-Islam al-Qubanchi ‎described the Warsaw Summit as a failure and said, “The ‎enemies have been defeated by Iran despite the use of all options.”‎

RNA – In his Friday prayer sermon delivered to a large and fervent crowd of believers in ‎‎the ‎‎Iraqi holy city of Najaf’s al-Fatimiyah al-Kubra Husayniyah, Hujjat al-Islam Sayyid ‎‎Sadruddin ‎‎al-Qubanchi‎ ‎referred to the meeting to create a global alliance against Iran in Warsaw, ‎Poland and stated, “The normalization of relations with the Zionist occupying regime and the ‎formation of an anti-Iranian front was one of the goals of the Warsaw Summit, which was ‎not attended by some of the countries.”‎

The Iraqi Shi’ah scholar ‎added, “The enemies used a variety of weapons, such as soft ‎warfare, internal disputes, armed conflict and economic warfare to bring Iran to its knees but ‎failed.” ‎

He condemned to failure any normalization of relations with the Zionist occupying regime, ‎adding, “The people of Islamic countries will never recognize this decision by the heads of ‎their countries and don’t accept it.” ‎

Hujjat al-Islam al-Qubanchi ‎added, “The presence of tens of millions of Iranians in the ‎celebration of the fortieth anniversary of the victory of the Islamic Revolution of Iran reflects ‎the resorting of the people of this country to the leadership and their emphasis on ‎confronting the enemies and efforts to promote domestic progress, especially in the field of ‎science.”‎

His Eminence ‎condemned the terrorist attack on a convoy of Iranian Revolutionary Guards ‎Corps border guards in Sistan and Baluchestan province and said, “Martyrdom will increase ‎and strengthen our national spirit.”‎
‎ ‎
He responded to the rash statements of the Zionist regime to attack Iran from inside Iraqi ‎territory, saying, “These kinds of speeches reflect the fears of Israel and the United States in ‎regard to Iran. Iran has no military presence in Iraq and only a few military advisers are ‎working on the request of the Iraqi government in this country.”‎
‎ ‎
Hujjat al-Islam al-Qubanchi ‎described the war with the United States as a war of civilizations ‎and stressed, “The enemies are afraid of religion, freedom, authority and Islam.”‎
‎ ‎
He also mentioned the issue of the presence of American troops in Iraq and said, “Iraq has ‎the ability to support itself and doesn’t need military personnel from other countries.”‎

Tags: al-Qubanchi Iraq Iran Israel Warsaw Summit
Short Link rasanews.ir/201rNR
Share
0
Please type in your comments in English.
The comments that contain insults or libel to individuals, ethnicities, or contradictions with the laws of the country and religious teachings will not be disclosed