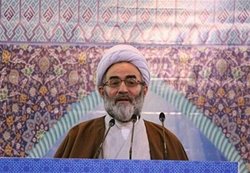 Rasa – The Friday prayer leader of Rasht said that the women of the Islamic Seminaries ‎must prevent the phenomenon of menacing phenomenon of masculinizing women in ‎different parts of society.‎

RNA – Speaking at a ceremony at the Women’s Seminary of Gilan, Hujjat al-Islam Rasoul ‎Falahati said, “After the victory of the Islamic Revolution and in the presence of the Great ‎Imam [Khomeyni] and the Supreme Leader [Ayatollah Khamenei], women were able to ‎stand alongside men in the field of the knowledge of religion and science. Today, in our ‎beloved Iran, our beloved Iran is witnessing the presence of knowledgeable women and ‎even this issue has expanded to the countries of the region.”‎

The representative of the Supreme Leader in Gilan continued, “Although in the past, women ‎had been involved in the fields of religious knowledge and jurisprudence but what we now ‎face on the battlefield is something which we didn’t have in the past and this situation is ‎something to be very proud of.”‎

Hujjat al-Islam Falahati ‎pointed to the presence of women in the fields of science and ‎knowledge, adding, “Of course, this presence means to relegate that which the sacred law ‎has endowed to the people, that is, training mankind isn’t through them.”‎
‎ ‎
The Friday prayer leader of Rasht argued that today the Western world wants to masculinize ‎women and stated, “The women in the seminary must prevent this phenomenon from ‎spreading to different parts of society and combat it in a moderate manner and eliminate it ‎from the Islamic society.”‎
‎ ‎
Hujjat al-Islam Falahati ‎said that the growth of the activities of the women’s seminaries ‎across the country and in the shadow of the Islamic Revolution was blessed, saying, “Today, ‎the people are witnessing the emergence of brilliant talents in the women’s seminaries ‎as a ‎happy and luminous phenomenon. We owe this to the diligent efforts of the past scholars.”‎

Tags: Falahati Women Seminary Rasht
Short Link rasanews.ir/201rNO
Share
0
Please type in your comments in English.
The comments that contain insults or libel to individuals, ethnicities, or contradictions with the laws of the country and religious teachings will not be disclosed