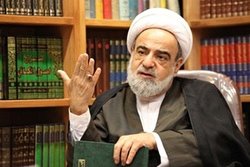 Rasa – A member of the Society of Seminary Teachers of Qom said that Iran is the leader of Shi’ah Muslims and a defender of Muhammadan Islam.

RNA – Speaking at the Wilayah Conference in Khuzestan province, Ayatollah Najmoddin Tabasi, a member of the Society of Seminary Teachers of Qom, referring to the remarks made by a senior official from Egypt’s renowned Sunni institute of learning al-Azhar University, during a meeting with Sayyid Hasan Nasrallah that the future is in the hands of the Family of Muhammad and added, “In order to promote Shi’ah teachings, we must be careful not to insult the sanctities of our Sunni brothers, although the ‘London Shi’ahs’ and Wahhabis have pursued such a project to spread sedition.”

Referring to the fact that the Yamani phenomenon is another one of the falsehoods created by the enemies after observing the progress of Shi’ism, His Eminence said, “Unfortunately, the discussion of Mahdism is a marginal issue in the seminaries and less attention has been paid to it.”

Ayatollah Tabasi stated that the Wahhabi phenomenon is threadbare and everyone, even Sunnis, fear it and added, “The Wahhabi crimes are a case on the one hand and the roots of their founding, their thinking and their supporters must be revealed. The authorities aren’t cautious in this regard and must clearly tell the truth to the people, especially the youth.”

He emphasized the need to explain resistance and the positions of the scholars and sources of emulation against Wahhabism and said, “The killing of 20,000 Shi’ahs in Karbala, the [2015] Mina stampede, and the killing of a six-year-old Saudi boy in Madinah must be stated so that all people are aware of the crimes of the Wahhabis. Wahhabis are seeking to revive the takfir [apostasy] of the Umayyads and blood to them is like water.”

Stating that Iran is the leader of Shi’ah Muslims and a defender of Muhammadan Islam, Ayatollah Tabasi, pointed out, “The scholars and the seminaries are expressing the truth and in spite of the very small budgets and with the fewest facilities, they have provided valuable services. On the other hand, by providing services to the people we can abstain from giving excuses to the enemies and Wahhabis.”