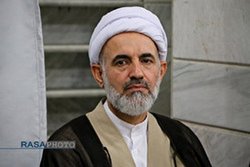 Rasa – The representative of West Azerbaijan in the Assembly of Experts‎ said, “The ‎passionate presence of the people in the 22 Bahman marches ‎is a ‎response to the call of ‎the Supreme Leader ‎and constitutes resistance against the foolish statements of the United ‎States.”‎

The dean of the University of Qom said that as long as the blessed life of the Islamic ‎Revolution continues, the enemies’ plots become more complicated and said, “Today, ‎despite the fact that all of the plots of the arrogant powers have reached maturity, the ‎people of our countries have become more and more patient and persevering.”‎

Referring to the opposition between the discourse of the Islamic Revolution and the ‎discourse of the West, he said, “The claim of the Islamic Revolution is the rule of Islam all ‎over the world and we’re the advocates of restoring religious and human values to the ‎people of the world. We must know that there’s a long way to go until we achieve an ‎Islamic civilization and we must turn the flag over to the blessed hand of Imam al-Mahdi ‎through patience and perseverance against the arrogant powers of the world.”‎‏ ‏

Hujjat al-Islam Dirbaz emphasized that the United States is seeking to strengthen ‎Iranophobia and wants to unite Iran’s opponents and said, “The passionate presence of the ‎people in the 22 Bahman [February 11] marches ‎is a response to the call of the Supreme ‎Leader of the Islamic Revolution [Ayatollah Khamenei] and constitutes resistance against the ‎foolish statements of the United States.”‎

Tags: Dirbaz Islamic Revolution 22 Bahman USA Khamenei
Short Link rasanews.ir/201rLx
Share
0
Please type in your comments in English.
The comments that contain insults or libel to individuals, ethnicities, or contradictions with the laws of the country and religious teachings will not be disclosed